But, in report to Centre, state denies malnutrition as the reason behind infant mortality in tribal block 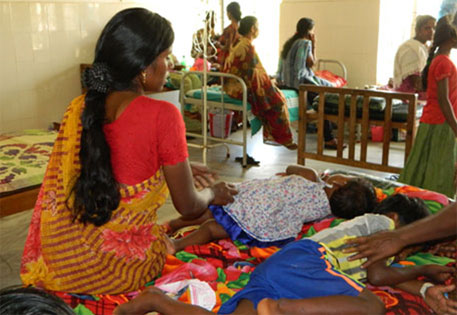 In a flip-flop over recent infant deaths in Attappady, Kerala’s Congress-led government has issued contradictory statements in the State Assembly and in a report to the Centre.

State minister for welfare of scheduled castes and scheduled tribes, P K Jayalakshmi, admitted in the Assembly on Wednesday that malnutrition in pregnant tribal women was responsible for infant deaths in Attappady block of Palakkad district.

The minister’s statement was based on the findings of a team of doctors formed by the Kerala government to investigate continuing infant deaths in the region. The team had submitted its report in the last week of November.

Despite these findings, the state government told the Centre in another report in December that malnutrition was not behind infant mortality in Attappady.

However, 63 malnutrition-led infant deaths were reported in 2012-13, in a span of one year itself. Twenty tribal infants have died this year, five of whom died in the first 10 days of November. Thirty-three miscarriages have also been reported from the region.

The state’s report to the Centre has cost Attappady monetary assistance from the Union government this year. On December 8, Union Tribal Affairs Minister Jual Oram told the Lok Sabha a separate package could not be considered for the region based on the state’s report.

When infant deaths were reported in 2013, the Centre as well as the state government had announced special packages of Rs 400 crore for 192 tribal settlements.

"Since then, the government has spent a lot of money on various welfare schemes, but the fact remains that nothing has changed," says Rajendra Prasad of Thampu, a non-profit working among tribals in the state.

No improvement in nutrition for tribal women

The medical team identified 200 infants as being undernourished during their investigation this November. Its findings show that a majority of tribal infants in the block are underweight (below the prescribed 2.8 kg). It is estimated that these deaths occurred due to pregnant tribal women’s lack of access to nutritious food and healthcare. The team's recommendations include a balanced diet for these women, regular monitoring and the preparation of a chart to monitor their weight.

While there has been improvement in infrastructure at the Kottathara specialty hospital and other health centres, many remote hamlets are unable to access healthcare services. Deliveries still take place in homes instead of under institutional care.

The lack of essential healthcare facilities and anganwadis and the failure of different welfare schemes have led to deplorable living conditions of tribal communities in Attappady. The root causes of malnutrition among these tribes are land alienation, lack of resources to cultivate the land in their possession and deviation from traditional crops. Read “Why death stalks infants of Kerala’s lone tribal block”.