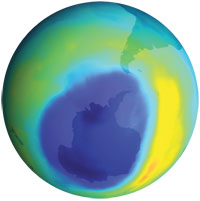 The ozone hole over the Arctic would have been 40 per cent bigger today if ozone-depleting chemicals had not been banned in the 1980s, suggests a new research. It says that if not for the success of the Montreal Protocol in 1987, the hole would have been large enough to affect northern Europe, including the UK.

Growing international pressure led to the signing the United Nations agreement in Montreal which phased out ozone-depleting chemicals, including chlorofluorocarbons (CFCs)—once widely used in fridges and spray cans.

Ozone absorbs ultraviolet radiation, preventing most of it from reaching the ground. The new research was led by scientists at the University of Leeds, UK, where they simulated what the ozone hole would have been like today if nothing had been done.

Meanwhile NASA’s AURA satellite, a mission to study ozone and air quality,  shows a long term trend that, barring unforeseen hiccups, should see the hole over the Arctic shrink to less than 8 million square miles within the next thirty years. At the moment the hole is about 12 million square miles, so that represents a rapid rate of repair.