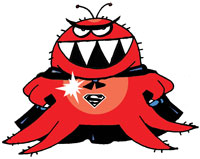 A research team at the Aligarh Muslim University (AMU) has, reportedly, detected New Delhi metallo-beta-lactamase-4 (NDM-4) in bacteria generally found in sewage. Metallo-beta-lactamases are a category of enzymes which turn bacteria into superbugs. They are known to prevent the action of several antibiotics, rendering them ineffective. NDM-4 was found in Escherichia coli (E. coli), a bacteria which commonly causes gastrointestinal and urinary tract infections. This is the first time that NDM-4 has been reported in India.

Earlier, a variant of metallo-beta-lactamases, NDM-1, was found in Enterobacteriaceae in Swedenfrom an Indian patient hospitalized previously in New Delhi in 2008 ( see 'Superbug: India gets bugged'.

Later, a study published in 2011 found NDM-1 in environmental samples in New Delhi.

Antibiotic resistance
The variant NDM-4 is indicative of the evolution of NDM genes. NDM-4 differs from NDM-1 by one amino acid substitution. NDM-4 is understood to be more dangerous than NDM-1 due to higher capacity to break the antibiotic molecule. Bacteria expressing the NDM-4 gene require higher quantities of antibiotics to inhibit them.

A team headed by associate professor, Asad Ullah Khan, at the Interdisciplinary Biotechnology Unit at AMU conducted this study and the results have been accepted in July, 2014, for publication by the Journal of Medical Microbiology. The study was conducted earlier this year, during which Khan and his team confirmed NDM-4 in one of the 52 carbapenem resistant strains that were analysed as part of this study. The strains were picked from sewage samples collected at the Aligarh Hospital. NDM-4 was detected in E. coli. So far, NDM-4 had only been detected in other countries like the UK, Germany and France.

When contacted, Khan confirmed NDM-4 is more dangerous than NDM-1. Bacteria carrying NDM-4 is resistant to carbapenems, cephalosporins and aminoglycoside classes of antibiotics as per the study. Khan said overuse of antibiotics in humans leads to the development of resistant strains of bacteria and that antibiotic resistance is spreading rapidly in India. “The significance of this study lies in the emergence of NDM-4 in India, but not the number of positives that were detected. People will now be aware of the start of the spread of NDM-4 in the country,” said Khan.

The Centre for Science and Environment (CSE) had earlier released a study which revealed residual antibiotics in chicken samples obtained from Delhi-NCR (See' How safe is the chicken you eat?. CSE, on studying poultry practices, pointed to the indiscriminate use of antibiotics for growth promotion and disease prevention in poultry farms, which is contributing to the evolution of resistant bacteria and its reservoirs in chicken, environment and humans. CSE also reviewed 13 studies which indicated that E. coli was highly resistant to different classes of antibiotics.

Antibiotic resistance is a growing threat to public health across the globe. The speed at which it is spreading is a big concern. Besides a bacterium having the potential to become resistant to multiple drugs, the genes coding for resistance can transfer from one bacterium to another and even between bacteria of different types. For example, NDM-1 gene is now found in different bacteria such as Klebsiella pneumonia, E. coli and Enterobacteriaceae, meaning antibiotics are likely to be ineffective in a wide-range of illnesses caused by these bacteria. It is possible that NDM-4 is also present in bacteria other than E. coli in India and is already contributing to failing treatments against several diseases. Increasing reservoirs of resistant bacteria in the environment amplify the possibility of emergence and spread of resistance in different bacteria against multiple antibiotics.