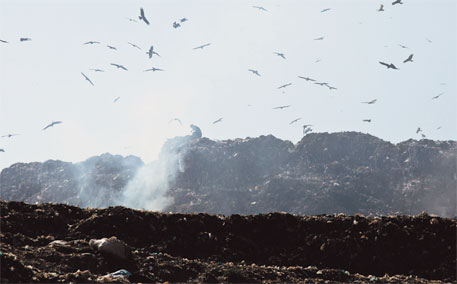 In a significant ruling, the Karnataka High Court has directed the Union Ministry of Environment and Forests not to notify its proposed controversial amendments to the Municipal Solid Waste (Management and Handling) Rules of 2000. The court, on October 24, ordered MoEF to consider all the objections filed against the amendments and then prepare new draft rules and place them before the court.

A division bench of the court, comprising justices N Kumar and B V Nagarathna, observed that the MoEF’s move to comprehensively amend the existing law governing municipal solid waste management would promote a regressive approach of collecting waste without segregation at source. The court noted that the proposed amendments would undo all the efforts taken up in the past decade in implementing the rules of MSW 2000. The proposed amendments will particularly harm the progressive waste management initiatives going on in Bengaluru for the past one year under the direct supervision of the high court, the judges said.

The division bench issued the order while considering a submission filed by Bengaluru-based non-profit Environment Support Group. The submission questioned MoEF’s notification on its website on July 2 this year, inviting comments on the proposed amendments to the existing MSW Rules. The submission pointed out that the proposed modifications to the existing rules were highly retrograde and promoted unjust, unscientific and unnecessary techniques of municipal solid waste management. On October 11, the court stayed the finalisation of the Draft Municipal Solid Waste Management Rules, 2013. The court asked the additional solicitor general, representing the ministry, to appear before the court and explain why it has proposed the amendments to the MSW Rules 2000.

The court observed that the proposed amendments while retaining the definition of the word “segregation” have omitted Schedule -II of the existing law, which details the process by which segregated waste should be handled and managed locally. The court held that the segregation of solid waste was prescribed on the basis of the recommendations of an expert committee and in pursuance of the directions of the Supreme Court in more than one case. The authorities have spent a lot of money to comply with the rules of MSW 2000, the division bench pointed out.

The court noted that the proposed amendments provide for waste collection, segregation, storage, transportation and processing, giving an impression that segregation is not needed before waste collection. “If segregation is to be made after collection, it involves public money. In order to avoid this liability on the public, the Rules want the public to segregate the waste and then it is to be collected by the authorities. If effect is given to that provision, it would undo what has been done in the last decade and in particular in Bengaluru for the last one year in pursuance of the directions issued by this court,” notes the order. The court pointed out that in Bengaluru, the Bruhat Bangalore Mahanagara Palike is spending a good amount of money on advertisements in the print and electronic media and holding public meetings for educating the public on the need for waste segregation at source. Each ward of the corporation has identified places for collecting segregated waste and transport it once in three days.

Assistant solicitor general S Kalyan Basavaraj submitted a memo before the court on October 24, saying that the amendments were formed in compliance with an order issued by the National Green Tribunal in 2011. The high court perused the order in detail and found that  the NGT’s order was based on the grievances filed by residents of Bharyal village in Totu Gram Panchayat in Himachal Pradesh, opposing the construction of a solid bio waste management plant in their village about nine kilometres from Shimla town. The residents had pointed out that proposed site where the plant was going to be constructed was close to human habitation and would pose threats to health and environment. They have also pointed out that the land which has been acquired for dumping of waste is a forest and that dumping garbage would contaminate groundwater and other water bodies. The Gram Panchayat has not given the no objection certificate for the plant.

The residents contended that as per the Schedule III of MSW Rules 2000, the landfill site should be away from habitation clusters, forest areas, water bodies, monuments, national parks, wetlands and places of important cultural, historical or religious interest. Schedule III also says landfill site should be away from airport, including airbase. Necessary approval of airport or airbase authorities prior to the setting up of the landfill site shall be obtained in cases where the site is to be located within 20 km of an airport or airbase.

The NGT observed that there was no indication with regard to the minimum distance to be maintained between the MSW plant and habitation clusters, forest areas or other places listed. In the absence of any distance specification, it is difficult to insist to maintain a standard. It also noted that there should be a buffer zone with prescribed area around the proposed MSW site.

In fact, what the NGT asked MoEF was to make the rules are more specific. “We feel that the MoEF should review the MSW Rules, 2000, and make it more realistic and comprehensive in terms of the environmental requirement for protection of natural habitat, human settlement, water bodies and other sensitive areas, by specifying the minimum distance required to be maintained from the MSW Plant. Prescribing minimum distance criteria of ecologically sensitive areas and human habitation from the proposed site will go a long way towards preventive measures to avoid environmental ramification, including the problem of obnoxious smell associated with such other hazards,” said NGT.

The tribunal directed the MoEF to critically review MSW Rules, 2000 and make it more pragmatic and workable.
“But instead of making the MSW Rules more progressive, the ministry proposed amendments, promoting incineration technologies for burning unsegregated garbage,” says Leo Saldanha of ESG. Incineration technologies have time and again failed wherever they have been tried in India and elsewhere, he adds.