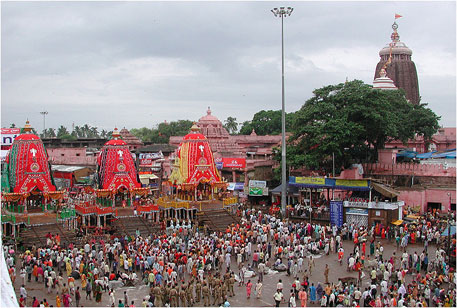 Procurement of kasturi (musk) for the new incarnation or Nabakalebara ritual and the annual Rath Yatra (chariot journey) festival at the 12th century Jagannath temple in Puri, Odisha, has sparked a controversy.

Wildlife activists and rationalists have taken strong exception to a letter from the Odisha government to the Union external affairs ministry, requesting it to obtain the aromatic substance from the Himalayan kingdom of Nepal.

Musk is applied on the temple idols—Lord Jagannath, Baladev and Subhadra. The aromatic substance is especially required before the Rath Yatra and during the Nabakalebara ritual when the temple idols are replaced with new ones. The deities were last replaced in 1996 and this will happen again next year.

“It (the letter) is a gross defiance of wildlife protection law and, perplexingly, the government agencies seem unaware of the stringent laws,” says Debendra Sutar, secretary of Odisha Rationalist Society.

Poor deer
Musk is obtained by killing the highly threatened musk deer. It is collected from the stag’s gland, also known as the musk pod. All musk deer species are protected by the international CITES pact since 1979 and under the Wildlife (Protection) Act, which makes it illegal on the part of the state government to seek the help of Union government to procure musk from deer for religious purpose, says Jiban Ballava Das, secretary for non-profit, People for Animals (PFA).

Officials see nothing wrong in the request. “The Jagannath Temple in Puri is facing a shortage of kasturi. Approximately five grams of kasturi powder is mixed with different herbs to make a paste, which is then applied to the faces and bodies of the idols. This is a part of the herbal treatment for the deities each summer before the Rath Yatra. Since time immemorial, the King of Nepal had been providing musk free of cost. But after the end of monarchy in Nepal, the country's government is reluctant to provide it.,” explains Arabinda Kumar Padhee, Odisha's secretary for tourism and culture who is also the chief administrator of  the Jagannath temple.  “Now, we are ready to purchase musk from Nepal,” he says.

Musk deer scent-mark their territories by rubbing their tail gland against trees and stones. The deer also uses the scent to attract the female. Each musk pod weighs about 15 gm. This tiny pod is what the poacher kills the deer for, says Das. The deer live in mountain forests. He says the demand for musk in Japan, China, and France, for making perfumes and medicines have led to its killing in every country, including India. In Nepal, their numbers are declining rapidly, and in India they will be gone in another five years, adds Das.

Till 1996, the French perfume industry alone used 15 per cent of the world’s musk, now this figure is about 10 per cent. A small amount of musk is used in homeopathic  medicines also, says Das.