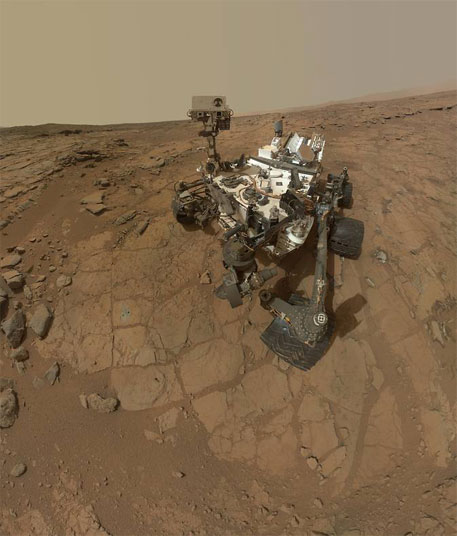 A team of scientists has detected nitrogen on the surface of Mars that can add evidence to the theory that the Red Planet may once have supported life, a NASA official told Down To Earth.

The detection was made using the Sample Analysis at Mars (SAM) instrument suite on board the NASAÃ”Ã‡Ã–s Curiosity rover.

Curiosity is a car-sized robotic rover which explores the Gale Crater on Mars as part of the US space agencyÃ”Ã‡Ã–s Mars Science Laboratory mission (MSL).

The nitrogen was detected in the form of nitric oxide and its release is likely from the breakdown of nitrates during heating, the team found after drilling into ancient Martian rocks.

When asked about the possibility of Mars supporting life, William A Steigerwald, the public information officer for planetary science at NASAÃ”Ã‡Ã–s Goddard centre told Down To Earth, Ã”Ã‡Â£This discovery does not mean Mars will be habitable in the future. Instead, it is a discovery about ancient Mars and suggests that perhaps the planet might have been habitable billions of years ago.Ã”Ã‡Ã˜

The importance of nitrogen

Nitrogen is essential for sustenance of all life forms. It is used in the building blocks of larger molecules like Deoxyribonucleic acid (DNA) and Ribonucleic acid (RNA) which encode the genetic instructions for life, and proteins, which are used to build structures like hair and nails. It also helps to speed up or regulate chemical reactions.

However, scientists cautioned that there is no evidence to suggest that the nitrogen molecules found by the team were created by life as the surface of Mars is inhospitable. Instead, the team thinks that the nitrates are ancient. They very likely came from non-biological processes like meteorite impacts and lightning on Mars in the past.

According to NASA, nitrogen atoms have to be separated or Ã”Ã‡Â£fixedÃ”Ã‡Ã˜ so that they can participate in the chemical reactions needed for life. On Earth, certain organisms are capable of fixing atmospheric nitrogen and this process is vital for any metabolic activity. However, smaller amounts of nitrogen are also fixed by energetic events like lightning strikes and this may have happened on the Red Planet, according to the scientists.

Mars may have sustained life in past

There is ample evidence to show that Mars was once a favourable planet to support life forms. The discovery of dry riverbeds and minerals suggest this.

The team has also found evidence that other ingredients needed to support life like liquid water and organic matter were present on MarsÃ”Ã‡Ã– Gale Crater billions of years ago.

Finding a biochemically accessible form of nitrogen supports the fact that the ancient Martian environment at Gale Crater was perhaps habitable, according to Jennifer Stern of NASAÃ”Ã‡Ã–s Goddard Space Flight Center in Greenbelt, Maryland.

Stern is the lead author of a paper on this research published online in the Proceedings of the National Academy of Science recently.

Discovery of indigenous Martian nitrogen on Mars surface materials has important implications for habitability and, specifically, for the potential evolution of a nitrogen cycle at some point in Martian history, the paper reads. Fixed nitrogen could have facilitated the development of a primitive nitrogen cycle on the surface of ancient Mars, potentially providing a biochemically accessible source of nitrogen, it reads.

The team found evidence of nitrates in scooped samples of wind-blown sand and dust at the Ã”Ã‡Â£RocknestÃ”Ã‡Ã˜ site, and in samples drilled from mudstone at the Ã”Ã‡Â£John KleinÃ”Ã‡Ã˜ and Ã”Ã‡Â£CumberlandÃ”Ã‡Ã˜ drill sites in Yellowknife Bay. Yellowknife Bay is a geologic formation in Gale Crater on Mars.

The team thinks the mudstone at Yellowknife Bay was formed as a result of sediments deposited at the bottom of a lake. Previously, the rover team had described the evidence of an ancient, habitable environment there: fresh water, key chemical elements required by life such as carbon, and potential energy sources to drive metabolism in simple organisms.

The samples were first heated to release molecules bound to the Martian soil, then portions of the gases released were diverted to the SAM instruments for an analysis. Besides nitrogen compounds, the also instruments detected nitric oxide.

Ã”Ã‡Â£Scientists have long thought that nitrates would be produced on Mars from the energy released in meteorite impacts, and the amounts we found agree well with estimates from this process,Ã”Ã‡Ã˜ Stern said.