Antarctica temperatures were 4°C above normal; India recorded a spike of 1-2°C 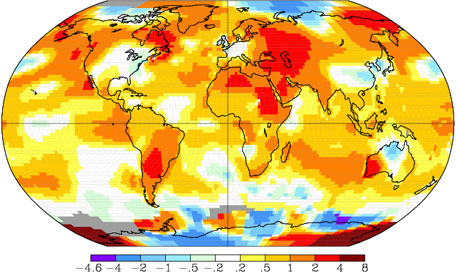 Latest global temperature data released by NASA’s Goddard Institute for Space Studies (GISS) shows that land and sea-surface temperatures rose by 0.7°C in August 2014, making it the hottest August since the first records in 1880. This increase is above the 1951-80 global average.

Temperatures in August have remained above normal, with August 2011 being the second hottest August at 0.69°C above the 1951-80 average.

Parts of Antarctica saw the highest spike with temperatures more than 4°C above normal. Most parts of India experienced an increase of 1-2°C last month, while the eastern and north eastern states were warmer by 0.2-1°C.

This is the third month this year during which global temperatures have breached previous records. According to the National Oceanic and Atmospheric Administration (NOAA), the average global temperature in June was 0.72°C higher that the 20th century average. May was also the hottest in recorded history, at 0.76°C above normal, according to data revealed by the Japan Meteorological Agency (JMA) and NASA.

The year 2014 has largely followed this trend even as the El Nino phase, expected to cause extreme weather events in 2014, is yet to fully set in.