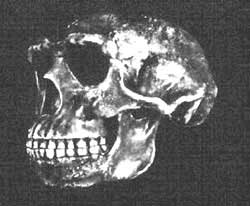 For long it was believed that Neanderthals were mainly carnivorous. But a recent study by researchers at the Massachusetts Institute of Technology in the US and University of La Laguna in Spain shows that plant sources too made up a significant part of the Neanderthal man's diet. Neanderthals are an extinct human species that lived in Eurasia between ca. 230.000 to 40.000 years ago.

The team worked on excreta samples found in El Salt, Spain, that were up to 50,000 years old. They analysed the biomarkers to determine the type of food consumed by Neanderthals.

The analysis suggests that primitive man predominantly consumed meat, as indicated by high ratio of the faecal biomarker that marked the presence of a bacterial reduced cholesterol in the gut (coprostanol). But then they also found evidence of significant plant intake, which was marked by the presence of a compound often found in plant sources—5β-stigmastanol.

Ainara Sistiaga, lead author of the paper published in PloS ONE, on June 25, added that, the study results provide the first direct evidence of omnivory among Neanderthals, “even if in some of our samples we found a meat based diet, but not exclusively”.