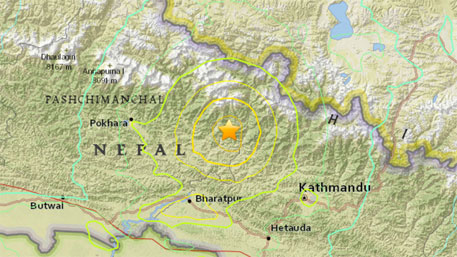 A powerful earthquake of magnitude 7.9 struck Nepal, 77 km from Kathmandu, on Saturday. Over 1,000 people have died, according to initial reports, and the toll is likely to increase as the scale of the damage unfolds. It is the worst earthquake in the Himalayan state in 80 years.

Violent to severe tremors were experienced in the northern and eastern parts India also. At least 36 persons were killed in northern India, according to reports. The epicenter of the earthquake was Lamjun, 77 km from Kathmandu. Eastern Uttar Pradesh, Bihar, Jharkhand, Sikkim and West Bengal were the most impacted states in India. Tremors were felt in Delhi, Rajasthan and some part of Madhya Pradesh as well.

Director General of India Meteorological Department (IMD), L S Rathore, says the depth of this earthquake was 10 kilometre below ground. Though IMD said the intensity of the earthquake was 7.5 on the Richter scale, European and US agencies have measured the magnitude at 7.9.

The first tremor was felt at 11.40 am followed by another tremor at 12.15 pm, measuring 6.4 on the Richter scale. The quake has caused huge damage in various parts of Nepal’s capital Kathmandu. Roads have caved in and some buildings have collapsed. Telcom services are also hit.

Metro service in Kolkata was stopped for a while; so was it in Delhi. People were seen leaving their houses and rushing towards road for safety.

Prime Minister of India, Narendra Modi, spoke to chief ministers of Bihar and Sikkim and also head of Nepal to discuss the situation. The Indian Air Force is in the process of evacuating Indians from Nepal, said Sushma Swaraj on her Twitter account. The country is also in the process of sending relief material to Nepal.

Nepal Seismological Centre had long ago hinted that a massive earthquake of this scale would hit Pokhara, a popular tourist place, and Kathmandu. Being in the highly seismic zone, the nation is highly vulnerable to earthquakes.

Both Pokhara and Kathmandu suffered huge damages. Down To Earth spoke to local journalists who confirmed heavy damage to buildings.  The airport in Kathmandu was closed.