Nepal landslide was a disaster waiting to happen, say experts

Local people had alerted authorities to persisting threat; landslides in the region have claimed 150 lives since 1990 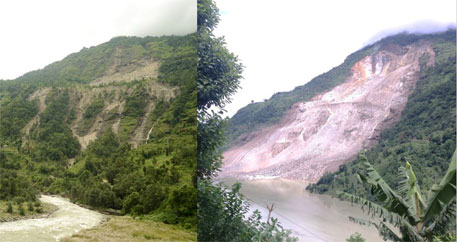 The massive landslide on the Sun Koshi river at Sindhupalchowk in Nepal in the first week of August  was a disaster in waiting, according to a rapid investigation report released on Sunday by Kathmandu-based International Centre for Integrated Mountain Development (ICIMOD)  after its experts visited the disaster site.

Narendra Raj Khanal and Deo Raj Gurung from ICIMOD compared satellite images of 2011, 2012 and 2013 and of August 5, this year and said that landslides have been taking place in the same region.

Landslides in Sindhupalchowk have claimed more than 150 lives since 1990. “Satellite images from 2001,2004 and 2011 clearly shows evolving landslide scar,” they said in the report. The ICIMOD experts were accompanied by members of Disaster Preparedness Network-Nepal during the site visit.

People residing around the landslide site told the visiting team that the initial signs of landslip were apparent from 2007 onwards. Local people alerted government officials about the major landslip occurred in 2011.

The Department of Hydrology and Meteorology accepted that two days prior to the landslide, there was 70 mm precipitation per day for two consecutive days.

Experts say that a blueprint to keep the landslides under check is needed to avoid similar disaster.

They have recommended bathymetric survey of the artificial lake that has been created because of the landslide on the Sun Koshi. The survey will help in calculating the volume of water stored in the lake.

Other major steps recommended by ICIMOD include geographical survey of the dam to ensure stability, hydrological modelling and inundation mapping to identify areas vulnerable to flood.
The flooding had damaged two hydro power plants, around two kilometre stretch of the Araniko highway that connects Nepal with China, scores of shops and also vehicles.

The ripple effect of the flood was also felt in Bihar which was threatened by flood in the Kosi river. The state government mobilised the disaster management force, Air Force and medical units. Families living inside the Kosi embankment were forcibly evacuated to avert danger.

Living with water stress in the hills of the Koshi basin, Nepal