Cholera assuming epidemic proportions poses a threat to the nation, said Haiti’s health ministry after the disease gripped the earthquake-battered capital, Port-au-Prince. By November 9, more than 580 Haitians had succumbed to the disease and 10,000 were hospitalised with acute diarrhoea. The spread of the disease to Port-au-Prince is worrisome because the capital is overcrowded with 1.5 million people displaced by the January 12 earthquake, who live in tents without access to safe drinking water and sanitation. Officials have evacuated an entire tent colony of 2,000 people to a hospital, fearing further spread of cholera. Officials attributed the epidemic to floods in October.

The Mediterranean countries of Europe have rejected a proposal by the EU’s executive body to slash the global quota for endangered bluefin tuna catch from next year. French agriculture minister Bruno Le Maire opposed the proposal to cut total allowable catch to 6,000 tonnes, saying it would lead to loss of 500 jobs in France. Citing a study, Le Maire said the current quota of 13,500 tonnes is enough to revive the stock. Cyprus, Greece, Italy, Malta, Portugal and Spain backed France. The non-Mediterranean countries of Europe have supported Brussels’ call. Atlantic bluefin tuna population has decreased 80 per cent over the past 40 years; overfishing threatens their survival. Bluefin tuna is prized for sushi dish and Japan consumes three-quarters of the global bluefin tuna catch.

A Chinese activist who campaigned for compensating victims of a 2008 contaminated baby milk scandal has been jailed for two-and-a-half years. Zhao Lianhai, whose child was among the 300,000 made ill by the milk, was convicted of inciting social disorder. Zhao founded a website to provide information for parents after it was found that milk formula had been laced with a chemical, melamine, to give it a high protein-content reading. Melamine is used to make plastics, fertilisers and concrete. When added to food products it can cause kidney stones and kidney failure. In 2008, melamine was found in products of 22 Chinese dairy companies—one out of every five suppliers in China. Six babies died in the incident, which led to a worldwide recall of Chinese dairy products.

Researchers at University of Victoria in Canada have designed an index to measure the environmental costs and benefits of fish farming. Large-scale farming of fish like salmon, cod, turbot and grouper leads to environmental damage, for example, introduction and spread of invasive species, and marine pollution. It also increases dependence on wild fish for feed. The Global Aquaculture Performance Index rates how sustainable a fish farming programme is for each species in each country. Ratings are based on 10 factors including environmental impact of capturing fish in the wild and the use of chemicals and antibiotics.

Governments can use the index to modify policies to minimise the environmental footprint of fish farming and consumers can use it to compare and select more environment-friendly seafood, said the lead researcher.

After months of silence, Nigeria’s main militant group, the Movement for the Emancipation of the Niger Delta (MEND), has launched attacks on international oil companies. On November 7, it attacked an oil rig of UK oil exploration company, Afren, and abducted seven workers. The company has since suspended its operations.

In 2009, the Nigerian government began an amnesty programme for MEND members in an effort to promote a ceasefire. Key MEND fighters accepted the amnesty, but some refused to lay down arms calling the deal a charade. They claim the foreign companies are exploiting Nigeria’s oil, without sharing the oil revenue with the people. 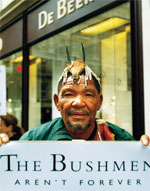 A tribal peoples’ rights organisation has launched an international campaign to boycott Botswana diamonds. The group, Survival International, recently held protests outside diamond stores of De Beers in London. The move aims to draw attention to the mistreatment of Kalahari Bushmen by the government. Survival International has also urged people to stop travelling to Botswana. In 2002, the Bushmen, who have lived in the Kalahari desert for more than 20,000 years, were illegally evicted from their ancestral lands to make way for diamond mining by De Beers. They won a legal battle against the government, which allowed the Bushmen to return home. But the government has banned them from using the well, their only source of water in the desert, said the rights group. The government has refuted the claims.

The Dutch government has scrapped a plan to store CO2 underground in a town of 43,000 following opposition from the town’s residents and its administration. The government had planned to capture 10 million tonnes of CO2 from an oil refinery of Shell and sequester it into two depleted gasfields in Barendrecht. Residents and town officials opposed the plan citing fear of CO2 leaks. Homeowners feared housing prices would plummet because of safety concerns. Though the technology of carbon capture and storage is controversial, the Netherlands uses it to store CO2 under the North Sea.

Toxic waste
Italy gets the rap

European Commission has taken Italy to the European Court of Justice for failing to implement repeated court orders on cleaning landfills around capital city Milan. Two of the three landfills were used by a chemical company and contain hazardous waste. The commission said Italy is in breach of Europe’s waste law and asked the apex court to slap a daily penalty of €195,840 (US $269,787) from the date of the court order in 2005 until compliance with the decision. The government said it has cleaned up one landfill and would clean up the rest by March 2011. The landfills have been around since 1986. In 1999, the city administration had to take emergency measures to maintain the water table in the region at an artificially low level to avoid water contamination.

Indigenous people’s groups have challenged Peru’s latest Amazon forest auction after it emerged they were not consulted before their lands were sold to foreign oil firms. Oil firms started work on an oil pipeline near Loreto that could decimate two previously uncontacted tribal communities. These tribes are under threat from an exploration boom which has opened up over 70 per cent of the Amazon to oil and gas companies.

They are vulnerable to any form of contact because of their lack of immunity to outsiders’ diseases. Several organisations criticised the companies and filed a lawsuit against them.