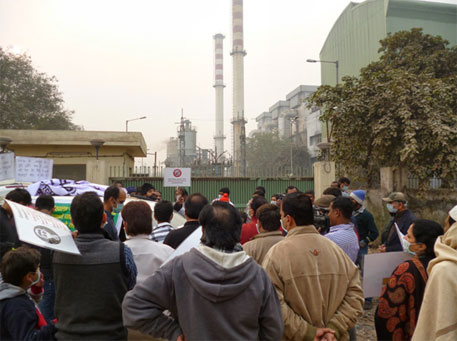 The National Green Tribunal (NGT) on Thursday ordered the Central Pollution Control Board (CPCB) to carry out continuous inspection of Okhla municipal waste incinerator in south Delhi for a period of seven days.

The case of dioxins emitting municipal waste incinerator of Timarpur-Okhla Waste Management Co Pvt Ltd (TOWMCL) of M/s Jindal Urban Infrastructure Limited (JUIL), a company of M/s Jindal Saw Group Limited owned by Prithviraj Jindal, was listed before the NGT on Thursday for the 17th time. After these 17 hearings in the NGT and 28 hearings in the Delhi High Court, the bench headed by Justice Swatanter Kumar directed CPCB to carry out inspections and to give the court a report in case the online system of monitoring emissions of the plant operator was non-functional at any time.

The bench also issued directions to municipal authorities to implement segregation of municipal solid waste at the point of origin—houses, offices and hotels—and charge a fee for the facility. The order was issued after the counsel for the applicants, Sukhdev Vihar Resident Welfare Association, said that the large quantity of solid waste brought to the plant daily is difficult to segregate at the plant and so waste should be segregated at source or origin. It was pointed out to the bench that the segregation of garbage source at the household level has already been introduced in Mumbai.

The bench also ordered CPCB to report whether the conditions specified in the environmental clearance granted to the incineration plant are being adhered to by the plant operator. The Union environment ministry, a respondent in the case, was directed to file its policy on the standards of emissions specified for MSW plants, with a further direction to clarify its policy on the location of municipal solid waste incineration plants.

Rakesh Kumar Matwa, advocate for applicants, submitted before the bench that the plant has a design flaw due to which its inspection cannot be carried out during the night time. He said that applicants of the case are suspicious of “collusion between the MSW plant management authorities and officials of CPCB” because the plant ceases to emit smoke just before an inspection is due.

Photographs, showing excess smoke emitted by the plant on October 17, 21, 26 and November 12, 2014, were also submitted to the bench to counter the claims being  made by the counsel for CPCB who said that that there was no pollution.

In September 2013, the National Green Tribunal warned Jindal Urban Infrastructure Ltd (JUIL)  to control emissions and segregate waste or else face closure. The tribunal gave the company three weeks time to comply with its directions. The tribunal had declined the plea of the petitioner to shut the plant outright. The tribunal order said the JUIL shall, within a period of three weeks, ensure that all the parameters of emissions are brought within the prescribed limits and that steps are taken to ensure automatic and proper segregation of waste before it is disposed of, as prescribed by the Municipal Solid Waste (Management and Handling) Rules of 2000.

However, the case has been going due to complaints about non-compliance of the court orders by the plant authorities.