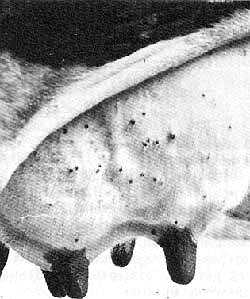 FIRST superheroes and now supercows. The USA is raising a breed of super-udders that will raise milk production in the country by 25 per cent, according to the Food and Drug Administration (FDA). From 1 February, 1994, some farmers began injecting the hormone bovine somatrophin (BST) into cows to boost their milk quantum.

BST, a naturally-occurring hormone, is being marketed under the name Posilac by a major US chemical company, Monsanto, which developed it along with some smaller firms.

The hormone, however, is the focus of a debate that has been raging in the West for the past nine years (Down To Earth, August 31, 1993). The European Community (EC) is extremely sceptical about BST's efficacy. In fact, the European Commissioner for Agriculture, Rene Steichen, imposed a moratorium on it, saying it was a bio-technological preparation that may well harm cows. And despite the US's stamp of approval on the hormone, the ban is still in force.

The EC is also opposing the use of BST because it fears that the sudden surge in milk production will play havoc with the subsidy-laden economies of its member nations. Environmentalist groups and animal welfare organisations all over Europe are wholeheartedly supporting their respective governments. "BST is not a useful way of using the technology. It is a product that no one needs. We certainly do not need surplus milk," says Steve Emmott of BST Concern, a British group representing farmers, environmentalists and animal welfare organisations.

The Americans response is significant. Some consumer organisations, led by Washington-based activist Jeremy Rifkin, took to the streets in protest against the FDA's approval of the hormone. They dumped milk on the streets and urged dairy cooperatives to reject BST outright. response Their efforts have worked. Fearing a consumer backlash, 200 US food companies have asked their suppliers not to deliver hormone-enhanced milk for the next three months, time enough for them to assess the market impact.