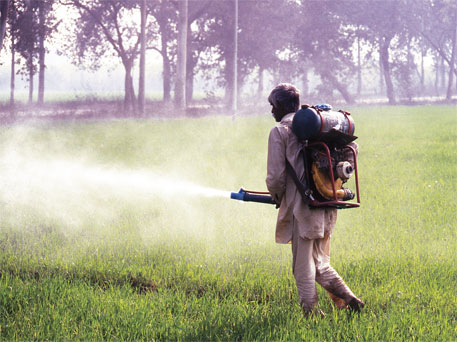 A new report released by an industry chamber has expressed serious concern over increasing pest attacks on crops, saying it is a threat to food security of the country.

Pest attacks on crops like rice, wheat, sugarcane, groundnut, pulses and mustard have increased manifold since the 1940’s. Total number of pests that attacked rice, sugarcane and pulses were around 35, 28 and 35 respectively in the 1940’s. Their numbers have increased to 240, 240 and 250 at present, says the report released jointly by Federation of Indian Chambers of Commerce and Industry (FICCI) and Tata Strategic Management Group (TSMG) at a conference on agrochemicals.

The report—Agrochemicals for ensuring food and nutritional security for the nation—says maximum number of serious pests, numbering 43, attack sugarcane; pulses suffer attacks from 34 types of pests (see box 1). The report says increased loss of crops to pests pose a serious threat to ensuring food security and agrochemicals would play an important role in dealing with this threat.

The report claims the role of crop protection chemicals is not limited to protection of crops, but also helps in yield enhancement. Farmers who use crop protection chemicals that are insecticides, fungicides, herbicides, bio-pesticides and other growth regulator chemicals for plants can increase crop productivity up to 50 per cent as it can mitigate crop loss from pest attacks by 40 per cent. It says that almost 20 per cent of world’s agricultural production is lost because of post-harvest pest attacks.

Minister says no to hazardous pesticides

“There is a need for holistic green revolution in the country and our motto should be less chemicals-more crops,” he said.

The minister stressed on the use of more bio-pesticides made from natural substances like plants, animals, bacteria and certain minerals. Bio-pesticides are eco-friendly, easy to use and require lower dosage amounts for same performance as compared to chemical-based pesticides, he said.

The report states that bio-pesticides hold just three per cent of the market share, while insecticides, 60 per cent, fungicides, 18 per cent and weedicides, 16 per cent.

According to the report, the Indian crop protection (agrochemicals industry) is valued at US $4.3 billion and is expected to grow at 12 per cent over the next five years. Among agrochemicals insecticides have the largest share with 60 per cent followed by herbicides accounting for 16 per cent market share. Herbicides are the fastest growing segment, it says.

The report says agrochemical industry faces a number of challenges because of strict environment regulations and low focus on research and development due to high costs involved. Another observation of the industry lobby is that long gestation period for new products was also hampering agrochemical growth. It takes almost 10 years to bring a new molecule into the market and much longer for the generic products to be registered. They complain that regulatory bodies do not have adequate resources and infrastructure to ensure timely registration of products.

Meanwhile, in a media statement on Wednesday, Alliance for Sustainable and Holistic Agriculture (ASHA) welcomed the fertiliser minister's announcement about banning pesticides that are harmful for biodiversity. ASHA said the group had been pointing out with evidence from the ground that synthetic pesticides are not inevitable in agriculture and that there are natural and biological ways of pest and disease management.