WHEN Annapurna Devi visited the rainforests of the Amazon she wanted to bring back a memento that embodies the pristine beauty of the region. She chose some necklaces and earrings made of olho-de-cabra seeds, or the red and black tento seeds, which the indigenous communities turn into beautiful jewellery. Devi was the only one among a host of visitors from other countries to buy the jewellery. The Americans, Canadians and British loved the jewellery as much but said they could not carry it home because customs officials would confiscate any item that contained foreign plant material. 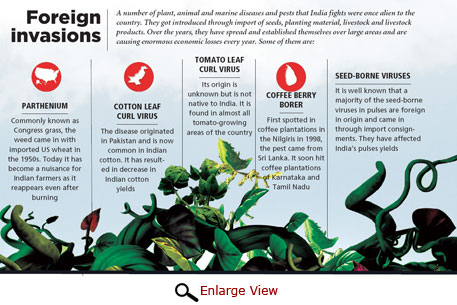 What makes their countries cautious is the looming threat of invasion by new pests and organisms that can cause outbreaks of plant or animal diseases. So did Devi have any problems with the authorities upon arriving at Delhi? Not at all. Maybe because customs officials took the seeds for trinkets. But then in Mumbai officials allowed a scientist carrying a packet of seeds from Eastern Europe to enter the country, even after he declared it to the customs. In India only the customs officials have the power to search and seize the personal baggage of the incoming travellers. But they are not sufficiently trained to detect specific pests or plant diseases. As a result India has been prone to invasion by pests and diseases (see ‘Foreign invasions’).

To strengthen the quarantine mechanism and integrate plant and animal quarantine services in the country, Union agriculture minister Sharad Pawar has recently introduced the Agricultural Biosecurity Bill 2013 in the Lok Sabha. As the bill defines, the word biosecurity means protection of the country’s plants, animals, aquatic resources and agriculture and related commercial activities from the adverse effects of an organism. The bill, pending with Parliament, seeks to set up a Central autonomous authority that will ensure biosecurity in all four agricultural sectors—plants, animals, living aquatic resources and agriculturally-important micro-organisms. Called the Agricultural Biosecurity Authority of India (ABAI), it will help the country meet international obligations related to biosecurity. The proposed legislation will replace two existing Acts—Destructive Insects and Pests Act of 1914 and the Livestock Importation Act of 1898. Since both these Acts are subsidiary to the Customs Act of 1962, they leave quarantine officials toothless. The bill proposes empowering quarantine officials to deport, destroy or confiscate the consignment or lodge complaints under the Indian Penal Code.

While presenting the bill, Pawar said it had been worked out following recommendations of the National Commission on Farmers and a core group of the agriculture ministry. The committees had suggested setting up a national agricultural biosecurity system along the lines of successful models in Australia, New Zealand and the US.

Analysts are far from being thrilled about the proposed law. “The bill, in its present form, does not introduce anything new,” says G V Ramajaneyulu, former scientist with Indian Council of Agricultural Research (ICAR).

For instance, Ramajaneyulu says, like the existing laws, the bill is just concerned with the quarantine of imported and exported commodities. There is a good chance that the introduction of a hybrid plant or genetic engineering of a plant may trigger invasion of pests or diseases from one species to another within the country. Many such crop seeds like Bt cotton, are responsible for increasing infestation among local crop varieties. “The bill fails to address the complications that arise following introduction of foreign plant, animals and genetic material,” he adds.

Officials in the agriculture ministry, however, say though agriculture is a state subject, the bill empowers ABIA to declare biosecurity emergency in case of an outbreak and deal with the situation. For instance, if a state fails to act or contain the spread of an infestation, ABIA can step in and the state government will have to reimburse the expenses it incurred. The bill also introduces stringent punishment for importers and custom house clearing agents for violation of provisions. If a person without permission retains, removes or tampers with any material that has been seized under this Act, he/she can be jailed for up to six months and fined up to Rs 2 lakh. The punishment can be doubled for regular offenders and the penalty can go up to Rs 1 lakh a day.

In case of lapses on the part of port authorities or at qurantine facilities where contamination can happen, the proposed law gives designated officers the power to inspect the facilities, seize, and treat or dispose of plants, animals and their products to prevent spread of any contamination. Is this sufficient?

An official in the National Bureau of Plant Genetic Resources says, on the condition of anonymity, that on an average, quarantine officials find 15-20 per cent of the agricultural imports containing pests, including those alien to India. One cannot check each and every seed or plant in an import consignment, he says.

Some of the drawbacks of the Indian quarantine system are lack of infrastructure and expertise, says N Seetharama, executive director with Association of Biotechnology Led Enterprises-Agriculture Group. For instance, the authorities that issue phytosanitary certificates to imported goods ensuring that the commodity is free from contamination, seed health testing technicians and pest control operators should be regularly trained in advanced biosecurity skills. There is a need to develop standard operating procedures and update laboratory manuals for use by quarantine personnel, he adds. “We need to develop more national standards in tune with International Standards for Phytosanitary Measures to comply with the Agreement on Application of Sanitary and Phytosanitary Measures, an international treatry of WTO.”

The agriculture ministry officials argue that the bill has been just introduced and a lot of changes would be carried out before it is passed.

According to the National Biodiversity Authority, India is one of the 17 mega-biodiversity countries. It is one of the eight primary centres of origin of cultivated plants, including rice, pulses, millets, vegetables, fruits and fiber crops. Nearly 255 breeds of animals such as cattle, sheep, goat, camel, horse and poultry are found in India. The Krishi Bhawan must take into account this rich biodiversity for preparing a foolproof agricultural biosecurity Act.