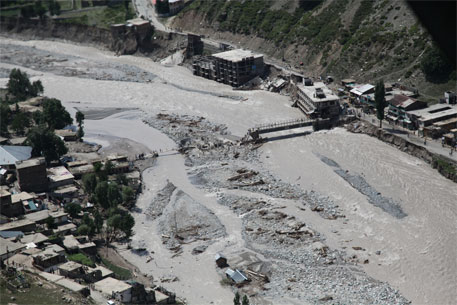 Floods in Pakistan have claimed over 200 lives and left nearly a thousand people homeless in the Punjab, Pakistan Occupied Kashmir (POK) and Gilgit Baltistan regions of the country.

The four eastern rivers in Pakistan—Chenab, Ravi, Sutlej, and Jhelum are in spate and it is estimated that 28,538 people have been affected in Azad Jammu and Kashmir (AJK) and Punjab. The floods have also damaged 11,292 ha of standing crops in various districts of Punjab region, 11,107 ha in POK. The damage done to crops in Gilgit Baltistan is still being assessed.

In Pakistan’s Punjab, River Chenab washed away 400 villages in Sargodha, Chiniot, Khushab and Jhang districts. Even though River Jhelum is also in spate, the damage caused by it is not as much as that caused by the Chenab which has a flow of 800,000 cusecs. The two swollen rivers would meet at Head Trimmu in the next 32 hours. The water level will remain high till September 12, says Pakistan Meteorological Department.

According to reports, 33 people, along with their livestock, have been evacuated from Deosai in Gilgil where they were trapped on a 16,000 feet (metre) high plateau because of heavy snowfall.

According to the National Disaster Management Authority of Pakistan, very high to exceptionally high rains or thunderstorm, coupled with unprecedented high flood discharges from across the border, since September 3, 2014, resulted in exceptionally high flood flows at Marala, Khanki and Qadirabad areas from the Chenab and the nullahs connected to the river. High to very high flood level in the Jhelum and high to very high impact on flows at Mangla and Rasul on the river was also experienced during this period. “Exceptionally high flood flows in excess of 900,000 cusecs discharged through Marala Headworks inundated vast tract of surrounding areas,” says the NDMA press release.

The Pakistan Meteorological Department had earlier issued a forecast of a weather system moving from Rajasthan in India which could lead to widespread heavy to very heavy rains or thunderstorm in north-east Punjab and Kashmir between September 4 and 7.

“The floods were now moving toward Pakistan's south. Evacuation work was already under way in several southern districts which could soon be inundated,” says a press statement issued by Ahmad Kamal, spokesman for Pakistan NDMA. Another 70,000 people have been asked to move to safer areas since several more districts could be affected in the next few days.