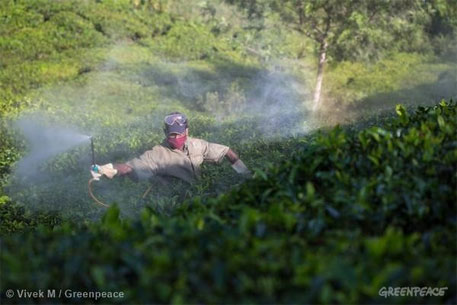 Starting the day with a cup of steaming hot tea can be hazardous for health.

Research conducted by non-profit Greenpeace has found presence of high to moderate amounts of pesticides in packed tea leaves.

The test results show presence of DDT in sixty-seven per cent of the tea samples even though its application in agriculture was banned long ago in 1989. Many tea samples also tested positive for monocrotophos, a highly hazardous organophospohorous pesticide.

The Greenpeace report , titled “Trouble Brewing”, alleged that test results show presence of pesticides classified both as highly hazardous and moderately hazardous by the World Health Organization (WHO). In fact, a large number of samples tested positive for a cocktail of toxic pesticides. They include neoniconitoid (nicotine-based) insecticides, such as imidacloprid, which are associated with reproductive or developmental impacts in animals, as well as affecting bees and other beneficial insects. The report also reveals the presence of other pesticides which have not been approved for use on tea crops in India.

Neha Saigal, senior campaigner for Greenpeace India, says the study results indicate that the tea sector is caught in a pesticide treadmill and the only way out is ecological farming.

Greenpeace India is calling on tea companies to support this change. “All the companies named in our report have been contacted and we have been interacting with them over the past several months,” said Saigal.

She added that Indian tea is a national pride, and it should not be the one linked to toxic chemicals with serious environmental and health risks. “All stakeholders in the tea industry should come forward and take steps to safeguard the reputation of our national drink. We even export it to countries like Russia, UK, US, UAE and Iran,” she said.

She claimed that most of the companies have responded to them, including the two market leaders, Unilever and Tata Global Beverages Limited (TGBL). “Unilever’s recent plans to undertake a major scientific research, including pilots, to create a roadmap for non-pesticide management in tea production aiming at a holistic rejuvenation of the ecosystem,” is a result of our negotiations and we it is a positive step that we will follow up in the coming months.

To highlight the urgency to move away from pesticides, Greenpeace India has also placed seven billboards at the Bandra Worli Sea Link, each urging the tea companies to “Clean Chai Now”.

“We urge all tea companies to take steps to move the tea sector away from this pesticide treadmill and clean our chai from crop to cup. The tea companies need to support adoption of ecological agriculture approaches like non-pesticidal management (NPM) for the sustained growth of the industry as well as safety of the consumers. NPM is already being practiced successfully in the country; it is both economically and ecologically viable,” Saigal added.