How irrigation projects in Maharashtra harnessed money, not water 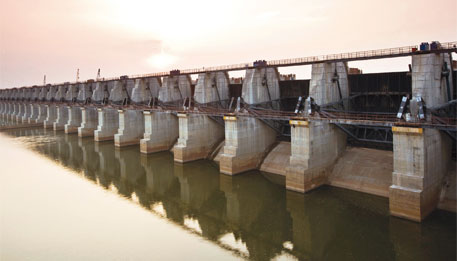 IT IS not just about large-scale financial and political irregularities. Maharashtra’s irrigation scam has put a question mark on the validity of the state’s high-cost irrigation policy itself. Under this policy very little irrigated area has been created in the state despite hundreds of dams being constructed and thousands of crores of rupees being invested.

But first the scale. Estimated at Rs 1,70,000 crore, it is bigger than the 2G spectrum scam. It might be even bigger. Quite a bit of the scam in Marathwada, for instance, is yet to be brought to light. Pune-based environment activist Vishwambhar Chaudhari alleges the state government has suppressed the M K Kulkarni Committee report on irrigation irregularities in Marathwada. The report mentions projects where the cost went up by a hundred times, Chaudhari says.

In Vidarbha, where much of the exposed irregularities lie, some 320 projects have been undertaken by the Vidarbha Irrigation Development Corporation since 1997. Actual increase in irrigated area till March 2011 has, however, been just 26,000 hectares (ha) against the targeted 1.58 million ha, according to the state water resources department.

The most defining part of the scam is the extraordinary cost escalation. Investigations by various agencies and individuals reveal baffling figures. In Vidarbha, the cost of the Gosekhurd project, the largest in Maharashtra, increased at the rate of Rs 1.19 crore per day. It shot up 36.52 times in 29 years to the current Rs 13,596 crore. The cost of the Lower Painganga project in Yavatmal district escalated at a rate of Rs 1.9 crore per day. 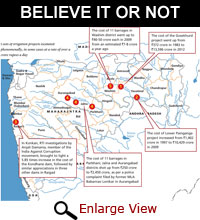 In Washim also the cost of 11 barrages went up to Rs 40-50 crore each in 2009 from an estimated Rs 7-8 crore a year ago. Similar cost escalations have been brought to light elsewhere (see ‘Believe it or not’,).

Official explanations for these manifold increase range from rise in land and rehabilitation rates to delays to rise in capacity, but the figures far exceed these exigencies.

Says Anil Kilor, president of the citizen’s group Jan Manch in Nagpur, who has filed a petition in the High Court demanding a CBI inquiry into the scam: “Costs have simply not gone up to that extent.”

Former MLA Babanrao Lonikar has pointed out in his police complaint filed in Aurangabad that the Lower Dudhana project in Parbhani, with a capacity of 12 thousand million cubic feet (TMC), was constructed at a cost of Rs 140 crore, whereas 11 barrages in Parbhani, Jalna and Aurangabad, with the combined capacity of just 7 TMC, ended up costing more than 17 times. “The cost-benefit ratio has no rationale because the capacity of the barrages has not been enhanced,” he says.

Investigations reveal that the actual reasons for cost escalations involve a series of violations, a part of which is illegal bulk clearance given to 36 projects by former state water resources minister Ajit Pawar. Violation of fund distribution rules, and not fund crunch, too delayed several projects.

In 2001, a high power committee had instructed that of the 96 projects with the Vidarbha Irrigation Development Corporation then, 45 projects, where 75 per cent work had been completed, be taken up on priority. Fourteen projects, with more than half the work completed, were to be taken up in the second stage and 37 projects with less than half the work finished were to be stopped. At that time the cost of completing the 45 top priority projects was estimated at close to Rs 400 crore.

However, the water resources department found in April, 2011, that the corporation had distributed available funds to all the projects. From 2003 to 2005, Rs 418 crore had been trapped in the projects where less than half the work was done. None of these could be completed. Only 10 of the priority projects were completed by March 2011 at a cost of Rs 460 crore.

Another major violation is starting work on dams without getting clearances, which is forbidden in the Maharashtra public works manual. At present, work on 37 dams, Lower Painganga included, in Vidarbha is stalled because of the lack of forest clearance. Funds trapped in these dams amount to Rs 1,162 crore. In Konkan, work on Kalu dam in Thane district has been stayed by the High Court due to the same reason. Sixteen dams in Vidarbha are stalled because tenders for them were issued before acquiring land, in violation of the Maharashtra public works manual. Another 12 are stalled because rehabilitation work has not been done. Funds to the tune of Rs 2,500 are trapped in these 28 dams.

“These violations have been made with the express purpose of inflating costs,” alleges Kilor. “It is a well known ruse to oblige contractors by giving them undue mobilisation and machinery advances years before work can be started.” He says Rs 400 crore have been given in advance in this manner.

Changes in design and trumped up design costs add to the escalation. The water resources department’s annual report points out that the change of design midway raised the cost of 16 projects in Vidarbha. In case of Bembla project in Yavatmal, a little over Rs 54 crore were wasted in changing the design of its canals from concrete to earthen and back to concrete, it points out.

“In a number of projects trumped up costs of piling and de-watering have been added,” says Devendra Fadnavis, BJP MLA from west Nagpur. “Fake discharge estimates have also been used to increase the size of dams.” He points out the case of Lower Painganga, where the Upase Committee report found that water discharge had been projected at double the actual. “This is a common practice in virtually all projects,” says Fadnavis, who was instrumental in getting the tenders cancelled.

Lonikar, in his complaint, has said that the cost of Marathwada’s 11 barrages was inflated by projecting 16-18 metres of piling despite the fact that trial boring showed hard rock strata at the depth of seven metres.

“Almost all dams project huge de-watering costs despite the fact that work is done in summer when there is hardly any water in the rivers,” adds Fadnavis.

Where are the benefits?

Despite the huge costs and efforts, only 16 per cent of the area in Maharashtra is irrigated. Hardly any dam in the state has ever fulfilled even half of its projected irrigation potential. “In most projects the cost-benefit ratios are forged,” Fadnavis says.

Another reason the potential does not translate into actual irrigation is incomplete and inferior quality of canal networks. Vidarbha has a gap of 356,000 ha between irrigation potential and actual irrigated area. Cases in point are the Gosekhurd and Bembla dams. Bembla, completed recently, showed a cost escalation of Rs 1.15 crore per day since its inception in 1992 and still requires Rs 400 crore for canal work. Gosekhurd currently has water stored up to 237 metres, but it cannot be delivered to farmers because the canals are incomplete and inferior.

The Upper Wardha dam, completed on paper, has achieved only half the irrigation potential due to shoddy canal work, according to Sanjay Kolhe of the Amravati non-profit Kisan Ekta Manch. “Only 30 per cent of the projected beneficiaries are getting water, and half of them had to repair the distributary canals at their own expense,” he says. “About 15 per cent of the beneficiaries have actually become victims because their land gets flooded instead of irrigated.”

The Pench project in Nagpur faces similar problems. Its badly constructed canals have been breached hundreds of times. On September 27 this year, farmers in Parshivni tehsil locked the irrigation department office after officials failed to repair the breaches despite four years of follow-ups.

Lift irrigation, considered low cost, is no exception. Whistle-blower Vijay Pandhare, who is the chief engineer of the water resources department, has pointed out in his letters to the chief minister that Rs 12,000 crore spent on lift irrigation projects in the state are a total waste because 99 per cent of the 227 projects in the state are not working, and 90 per cent never began functioning.

No cost-benefit analysis has ever been carried out for any irrigation project, activist Chaudhari says, adding, “If it were done, one would have found that dams are not the correct irrigation model for Vidarbha and Marathwada, where black cotton soil causes heavy siltation.”

There is no denying that the irrigation sector in Maharashtra is a total mess. In accepting Pawar’s resignation from the post of deputy chief minister, the government has admitted the scam, but all that has happened by way of action is Chief Minister Prithviraj Chavan’s promise of a white paper.

Public demand for an independent inquiry, either by CBI or a judicial commission, is gathering force. “A mere white paper will not do,” Chaudhari says. “There must be a multidisciplinary probe that must evaluate each project in detail, suggest corrective steps, bring out corruption and indict the guilty, whether a contractor, official or people’s representative.”

The second demand is for a cap on new projects till the investigation is complete and old projects are completed. Maharashtra Governor K Shankarnarayan has called for exempting Vidarbha from such a cap on grounds of its huge irrigation backlog. People’s groups do not buy this argument. Asks Pune-based land-rights activist Surekha Dalvi: “What is the backlog about—irrigation, funds or something else?”