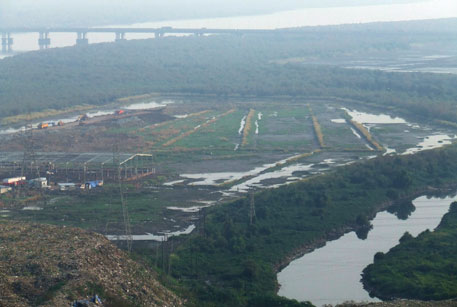 The Union Ministry of Environment and Forests (MoEF) overturned its own decision to give approval to a special economic zone (SEZ) in the ecologically sensitive coastal area in Mulund in the north-eastern part of Mumbai and in adjoining Thane. This was revealed when the ministry recently replied to a Right to Information (RTI) application filed by a Mumbai-based non-profit.

The ministry had initially rejected the Rs 3,000 crore SEZ in 2006  because the project site spread over 54.23 hectares (ha) was on land classified as Coastal Regulation Zone (CRZ) I. CRZ rules are applicable up to 500 metres (m) on the landward side of the high tide line and up to 100 m from high tide line along water bodies like estuaries that are influenced by tides. CRZ-I refers to those areas in the regulated zone which are ecologically sensitive and have special geomorphological features like mangroves, marshes and mudflats; the Mulund-Thane coast has mangroves and wetland.

The ministry subsequently allowed the site to be reclassified as CRZ III (relatively undisturbed coastal zone, including rural coasts) and approved the development project on December 19, 2006. The regulations for CRZ III are less stringent, but the revised CRZ regulations that came into effect from January 2011, do not permit new industries and expansion on CRZ III as well.

The project, say environmentalists, will destroy the wetland and mangrove cover in the area, and may cause flooding in neighbouring areas. About 80 per cent land reclamation work at the site has been completed.

The Right to Information query was submitted by non-profit Vanashakti in August this year. According to the reply, the SEZ for information technology (IT) and IT-enabled services (ITES) is being developed by Zeus Infrastructure Private Limited on the site which earlier had salt pans. Zeus Infrastructure is in a joint venture with developer Ackruti City Limited for the project. Vyomesh Shah, managing director of Ackruti City was not available for comments, but the spokesperson for the company says work has started only after obtaining all the requisite permissions from the Central and state governments.

The site is barely 200 metres from the Thane Creek and is surrounded by mangroves on three sides. Inter-tidal waters can be seen in and around the plot. “How can the government allow anyone to develop an SEZ on a land which comes under CRZ?” asks D Stalin, director projects, Vanashakti.

Stalin has questioned the reclassification of the land, the process for which began a few years back. In 2006, Zeus Infrastructure wrote to the state government and MoEF, urging that CRZ grading of the Thane end of the plot be changed from CRZ-I to CRZ-III so that they could begin construction.

The argument it gave in support of its case was: the area is not ecologically sensitive. There is no tidal influence on the area, which, the company said, is evident from the fact that seawater had to be pumped into it to extract salt till the activity ceased in 1996.

In reply, it got a letter from an MoEF official, asking how an SEZ could be allowed on land classified CRZ-I. Soon after this, Zeus Infrastructure approached the Maharashtra Coastal Zone Management Authority (MCZMA), seeking reclassification of the land. MCZMA supported the suggestion, and in early 2007 recommended to the National Coastal Zone Management Authority (NCZMA), under MoEF, that the plot be graded CRZ-III.

Finally, in March 2007, based on MCZMA's recommendation, the national authority converted the land to CRZ-III. On April 23, 2008, the area was notified as an SEZ project by the Union ministry of commerce and industry. Environmentalists have criticised the NCZMA decision. “Till date, you can see high tide waves gushing into the plot despite the recently constructed bund (embankment). How could they claim that sea water had to be pumped in?” asks Stalin.

According to A S Untawale, former deputy director of the National Institute of Oceanography (NIO), the agency on whose recommendation the area was graded CRZ-I, the reclassification is unjustified. “Generally, any land that has mangroves and is influenced by inter-tidal currents should be labelled CRZ-I. So, I feel that MoEF should re-examine the plot and verify its status,” he says. Untawale also says that MCZMA does not have the authority to reclassify the land. “Since there were salt pans on the land, the status cannot be changed under any circumstance.”

“The proposed SEZ at Mulund is a blatant violation of environment protection rules. The documents obtained under RTI regarding the project only confirmed our fears that the project, if approved, would destroy the wetland and mangrove cover at the Thane creek,” says Stalin.

“The SEZ involves wetlands and mangroves. The land in question here is undoubtedly CRZ-1, hence we lodged a complaint about the permission granted to the proponents of this project. We base our arguments on the RTI reply received in connection with the project,” says Stalin. The proponents have obtained the clearance by suppressing facts and giving false declarations, he alleges.

According to Stalin, the land has been incorrectly and mysteriously reclassified as CRZ III by MCZMA. “This was done despite reputed organisations like the NIO certifying the land as CRZ-1,” he says. The proponents, Stalin says, in their application submitted to MoEF, have stated that the land is free from the influence of tidal waters. “This is a complete lie as the photographs taken by us on October 15 and 19, 2011 show that the tidal waters enter the land during high tide. This happens regularly despite the making of a two metre wide bund to block the tide water all along the property,” he says. This bund was rebuilt around a year ago and expanded, touching the mangroves on the border of the site and is an attempt to block the sea water, adds Stalin. However, the force of the water is such that it still floods the land.

The proponents have stated that the land was previously used as salt pan and sea water was pumped in to make salt. “Nothing could be farther from the truth. Even today sea water will rush onto the land if the newly made bunds are opened at some places. In fact, the entire 10 km stretch from Thane to Deonar witness tidal flow up to one km landwards and more in some places. This site is less than 200 metres from the Thane Creek. A visit during high tide to the site will confirm this,” Stalin says.

A thick mangrove cover has come up on the land after salt manufacturing was halted in 1996. The post-2000 images of the land bear witness to the fact. “This crucial information was withheld from MoEF. We have also sent Google images of the site to corroborate our claims,” he adds.

Vanashakti has also refuted the claims by the project proponents that there are no ecologically sensitive areas around the site. “It has already been acknowledged that there are mangroves all around the site. What more proof would be needed the area is ecologically sensitive and that it is a proper wetland? The need of the hour is to protect wetlands wherever they are and not build on them,” says Stalin.

The Municipal Corporation of Greater Mumbai (MCGM) has selected around 65 ha in Kanjurmarg, a suburb near Mulund, to build a dumping ground, saying there is no other land available. But when it came to SEZ, this huge land was available. This SEZ land should have been available for dumping as well, says Stalin. “When there was an equal amount of land available adjoining the existing dumping ground at Mulund, why wasn’t that land acquired for the landfill or waste disposal. Instead, the government of Maharashtra has taken all possible steps to provide the land for private development while having no guilt about undertaking a new dumping ground project in the midst of mangroves about 7 km from this site. Are the mangroves of Mumbai and Navi Mumbai going to be sacrificed at the altar of greed and corruption for private benefit?” Stalin asks.

The government of Maharashtra admits to the presence of mangroves on paper. Paragraph seven of a letter (number: ENV 2006/1525/CR-175/TC-II, dated November 25, 2006) addressed to MoEF mentions that the project site is covered with mangroves on three sides. The fourth side is taken up by the Mulund dumping ground which was built on mangroves.

The proponents, in the documents submitted to MoEF (Appendix 1 in subsection III, point no 11) have stated that the adjacent dumping ground, used by the MCGM, has been closed from 2006. “This again is a blatant lie. The dumping ground is in use even today. Garbage and solid waste from the city is dumped here. We have latest photographic as well as videographic evidence of this,” says Kavita Mallya, project officer with Vanashakti. 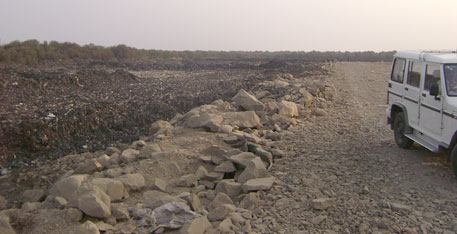 Fishers will be affected

The project proponents have also claimed that there are no communities that will be affected by the project. “The reality is different. The fishing and coastal community comprising the Agris and the Kolis dwell along the site in the village Kopri with a population of about 15,000. These communities will be denied access to their traditional fishing grounds and their access to the creeks is completely blocked by this project. Till date no attempt has been made to address this problem or consult the local community,” Mallya says.

The proposed SEZ would mean raising the height of the land substantially through land filling. It will render the coastal village of Kopri, next to the site, highly flood prone. Flooding is already a problem for the Patilwadi area of the village due to the dumping ground in its proximity. This project will only increase their woes.

In the project proposal, the document Annexure 1-B para 2 mentions the numerous charity works done by the proponents. “Is doing charity a parameter for releasing CRZ land for construction?” asks Mallya.

Vanashakti has lodged a formal complaint with the Union environment minister Jayanti Natarajan regarding the violation. “We have requested MoEF to cancel the permissions granted for this project, issue a stop work order and appoint an expert committee at the earliest to verify the facts. The mangroves that were on the land have been buried under rubble and the wetland is under threat due to the reckless reclamation being done by the developer, says Mallya. Member secretary of MCZMA, B N Patil, was not available for comments despite repeated attempts to reach him over phone.