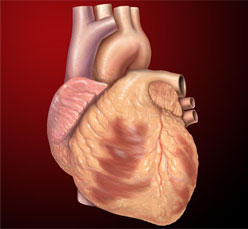 Research on the human heart and heart-related diseases just got bigger. In a first-of-its-kind experiment, doctors in London have stored 1,600 beating hearts in digital form to compare information and understand the common factors that lead to ailments.

The project is led by scientists from the Medical Research Council’s Clinical Sciences Centre at Hammersmith Hospital. One of them, Declan O’Regan believes this new approach will increasingly become the norm in medicine. “This new approach has the potential to reveal much more than normal clinical trials in which, relatively small amounts of health information are collected from patients over the course of several years. There is a really complicated relationship between people’s genes and heart disease. By getting clear 3D pictures of the heart, we hope to be able to get a much better understanding of the cause and effect of heart disease and give the right patients the right treatment at the right time,” he told BBC.

Another advantage of digital storage of cardiac information is the minute details picked up by a computer. “There are often subtle signs of early disease that are really difficult to pick up even if you know what to look for. A computer is very sensitive to picking up subtle signs of a disease before they become a problem,” O’Regan adds.

This is just one of the many “big data” ventures that are happening across the field of science. According to a BBC report, researchers at the Institute for Neuroimaging and Informatics at the University of Southern California are storing 30,000 detailed 3D brain scans, requiring the space equivalent to 10,000 laptops.

While such massive data can help scientists understand details that would otherwise not have been possible or would have taken many years, organising them to suit one’s needs could be challenging. Merely collecting the data will be of little help if it cannot be managed and analysed.

A whole new science is now emerging on how to classify research data logically so that teams can find the things they want to find. This also calls for investments worth millions of dollars. The United Kingdom’s Biotechnology and Biological Sciences Research Council recently announced a £7.45-million investment in the design of big data infrastructure, the report says. Such investment could radically change the way research is being carried out in various disciplines.

According to Paul Flicek of European Bioinfomatics Institute, big data could potentially lift a veil that has been shrouding important avenues of research. “One of the things about science is that you don’t always discover the important things; you discover what you can discover. But by using larger amounts of data, we can discover new things,” he told BBC.

Trends in hospitalizations and outcomes for acute cardiovascular disease and stroke: 1999-2011