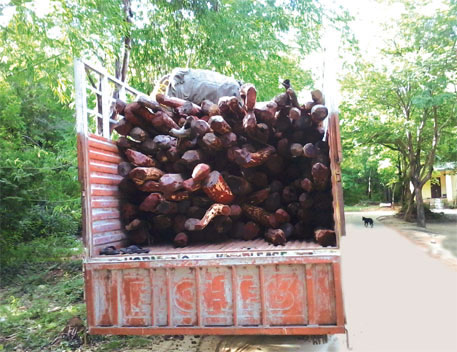 With more and more questions being raised on the recent killing of people in Seshachalam forests of Andhra Pradesh, the Hyderabad High Court on Thursday ordered the state government to conduct a fresh autopsy on the body of Sasikumar, one of the victims. On April 7, officials of the state forest department and police’s special task force (STF) had fired at alleged red sanders smugglers in the Seshachalam forests of Chittoor district near Tirupati, killing 20 people.

The order was passed while considering a complaint filed by Muniammal, widow of Sasikumar who hailed from Tiruvannamalai.

Muniammal submitted an application on Wednesday via her lawyer, demanding directions to the Andhra Pradesh government to once again conduct post-mortem examination of the bodies of her husband and five others. The application also asked for an expert medical team to conduct the process and videograph the entire process. In her complaint, Muniammal said her husband and others were daily wage labourers who were going to find work when Andhra Pradesh police cops took them away and shot them dead. She alleged that it was not an encounter the way police and forest officials claimed.

Taking suo motu cognisance of Muniammal’s complaint, the high court had earlier made her a petitioner in the case filed by Andhra Pradesh Civil Liberties Committee (APCLC) which had alleged that it was a case of “murder” and the victims were poor labourers from Tamil Nadu. Before this, Muniammal had approached the Madras High Court pleading for a re-postmortem order. The court, however, had told her that it was not in a position to pass an order regarding the same since there was no FIR before the court and the Hyderabad High Court was dealing the case. The six bodies have been preserved in a government hospital in Tiruvannamalai district of Tamil Nadu.

Meanwhile, Andhra Pradesh, on April 14, informed the high court that a case has been registered on Muniammal’s complaint under sections 302 (murder) and 364 (kidnapping) of the Indian Penal Code against unknown personnel of the STF. The high court was also told that the government was setting up a special investigation team (SIT) to conduct an inquiry.

The killings led to an uproar by human rights activists and politicians in both the states as a brutal police action. National Human Rights Commission has already ordered a judicial inquiry into the incident and directed the Andhra Pradesh government to submit the names of the officials involved in the killing. A team of National Commission on Scheduled Tribes will visit Sheshachalam to ascertain facts.