The black hole, according to the international space agency, is five times the mass of the one at the center of Milky Way galaxy 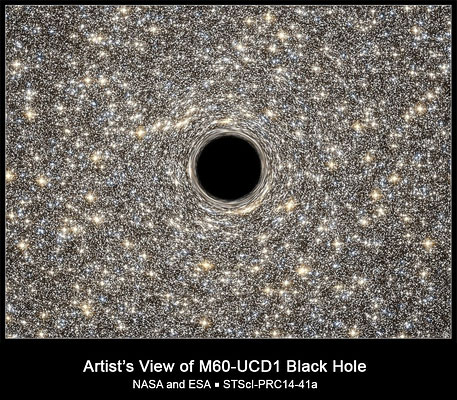 Astronomers have found an unlikely object in an improbable place—a monster black hole lurking inside one of the tiniest galaxies ever known. The discovery has been made using data from NASA’s Hubble Space Telescope and ground observation.

The black hole, according to the international space agency, is five times the mass of the one at the centre of our Milky Way galaxy. It is inside one of the densest galaxies known to date—the M60-UCD1 dwarf galaxy that crams 140 million stars within a diameter of about 300 light-years, which is only 1/500th of our galaxy’s diameter.

"The finding implies there are many other compact galaxies in the universe that contain supermassive black holes. The observation also suggests dwarf galaxies may actually be the stripped remnants of larger galaxies that were torn apart during collisions with other galaxies rather than small islands of stars born in isolation," says NASA in its press release.

Black holes are gravitationally collapsed, ultra-compact objects that have a gravitational pull so strong that even light cannot escape from them. Many galaxies are believed to have supermassive black holes—those with the mass of at least one million stars like our sun—at their centre.