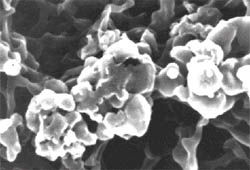 for the first time ever, a joint team of Indian and British scientists have found bacterial cells believed to be from outer space. According to them, it is the first real evidence of the presence of living organism floating in the Earth's stratosphere.

Chandra Wickramasinghe of Cardiff University outlined the findings of the experiment at a recent meeting of the International Society for Optical Engineering in San Diego, usa . He told the conference that a balloon flight at an altitude of 41 km had recovered the clumps of microbes. Preliminary findings, which are inconclusive, indicate that the bacterial cells may have come from outer space, he added. "They look like terrestrial cells, but it's exceedingly unlikely that they could have been lifted up from the ground in the quantity that we find -- something like 100 bacteria per litre of air," remarked Wickramasinghe. "My colleagues have identified these as living cells because they take up a certain dye and show up as a fluorescent spot under the microscope," said Wickramasinghe. The team has not yet been able to culture them. This, says Wickramasinghe, reinforces their theory that the microbes are something alien. Because if they were ordinary run-of-the-mill bacterial contaminants they would be very easy to culture, he argued.

Many scientists, however, are skeptical about the claims. Some say that more evidence is required before they can accept such an analysis. "There are unresolved questions about contamination in the experiments," says Alan Penny, an astronomer from the Rutherford Appleton Laboratory. "I think Chandra is being a bit optimistic," he adds. "It is an interesting finding but we have to be careful. A complete analysis of the samples has not been done as yet. The question about the source of the microbes -- whether they are from the Earth or outer space -- will remain unresolved till the final results are out," says Shobhit Mahajan, a reader at the department of physics and astrophysics, University of Delhi. John Zarnecki, a professor at Open University, the uk , highlighted the possibility of an experimental error . "I would like to be positive, but the burning question is: how do we know there is no contamination? Let's wait till the work is published and reviewed," he said.

Wickramasinghe has been criticised on the grounds that the research is yet another way to prove his so-called Panspermia theory, which suggests that the building blocks of life could be carried to planets by comets or drifting interstellar dust particles. Wickramasinghe has long been arguing that probably comets and space dust brought the seeds of life to the Earth. Along with the eminent astronomer, Fred Hoyle, he has put forward the Panspermia theory. But many scientists have opposed this theory and say there is not much evidence to support it. "We need to verify the evidence of Wickramasinghe's recent claims. He is just trying to find evidence to support his long-standing theory," says George Tranter, a biochemist from Imperial College, the uk.

To conduct the experiment, a balloon was launched by isro on January 21, 2001 from the National Scientific Balloon Facility of the tifr at Hyderabad. It carried a scientific payload to sample the stratosphere under the most stringently aseptic conditions, states the research paper. The payload included a cryosampler, which is used for collecting samples at very high altitudes where temperatures are extremely low, with fully sterilised evacuated stainless steel probes each with a 0.35-litre capacity. The probes were in duplicate sets -- one to be analysed at the Centre for Cellular and Molecular Biology in Hyderabad, India, and the other at Cardiff University. Further work on the samples is underway.