Centre plans to promote similar solar projects in other states 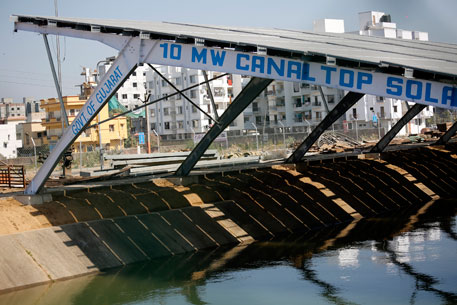 Admiring the innovativeness of the project, he said, “Looking out at the plant, I saw more than glittering panels—I saw the future of India and the future of our world. I saw India’s bright creativity, ingenuity and cutting-edge technology.”

The solar power plant is built over a 3.6-kilometre stretch of canal of the Sardar Sarovar project and consists of 33,816 solar photovoltaic panels. It is expected to generate 16.2 million units of electricity for the first year. The current cost of power generation is Rs 6.20 per unit.

“To address extreme poverty, we must end energy poverty. And we cannot reduce the threat of climate change without transforming global energy systems,” Ban ki-moon said.

Work on canal-top solar plants began in 2012. The state government had commissioned a one MW pilot project on the Sanand branch canal of the Sardar Sarovar project. After its success, Sardar Sarovar Narmada Nigam Limited (SSNNL) commissioned the 10 MW plant in Vadodara in January 2014. It was completed on November 22, 2014. The total cost of the project, including operation and maintenance for 25 years, is around $18.3 million, borne entirely by the state government.

While power generated by the plant is being used by the SSNNL authority for now, company chief engineer U C Jain said that its proximity to Vadodara will help provide clean energy to the city. Chairman and managing director of SSSNL, S S Rathore, said the panels will also help protect the canal water from evaporation.

Impressed with its own project in Gujarat, the BJP-led government at the Centre has announced that it would promote similar projects in other parts of the country and has sanctioned Rs 228 crore to create 50 MW of canal top and 50 MW of canal bank solar projects. It will now be interesting to see how other state governments respond to the Centre’s call.