Moving away from cars will bring significant environmental, financial, health and social benefits, says a report

A shift from cars to public transportation, walking and cycling in cities could eliminate 1,700 megatonnes of annual carbon dioxide by 2050, says a report released by University of California, Davis and Institute for Transportation and Development Policy (ITDP) this week. The report says this shift could also save 1.4 million people from early deaths and more than $100 trillion in cumulative public and private spending.

“Transportation, driven by rapid growth in car use, has been the fastest growing source of CO2 in the world,” said Michael Replogle, ITDP’s managing director for policy in a statement. “An affordable but largely overlooked way to cut that pollution is to give people clean options to use public transportation, walking and cycling, expanding mobility options especially for the poor and curbing air pollution from traffic.” 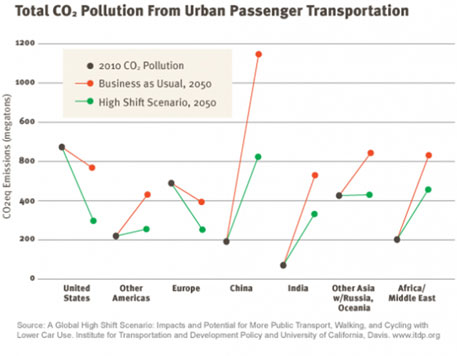 These figures were calculated based on two projections; one in which transportation continues as “business-as-usual” and the other in which governments make a “high shift” to rail, bus transport and infrastructure to support safe walking and cycling. Governments are also considered to have discouraged car use by moving investments away from road construction and parking garages and imposing the strongest vehicle pollution controls.

The second approach shows a dramatic drop in transport emissions and an enormous financial benefit in the coming years.

According to the report, CO2 emissions in India will rise from 70 megatonnes today to 540 megatonnes by 2050 due to increasing urbanisation. With the “high shift” approach, these emissions can be brought down to 350 megatonnes by making significant improvements to public transportation in India. The report also says that improved urban mobility will translate into social mobility, as poorer sections of the society will enjoy better access to employment and livelihood.

A global high shift scenario: impacts and potential for more public transport, walking, and cycling with lower car use