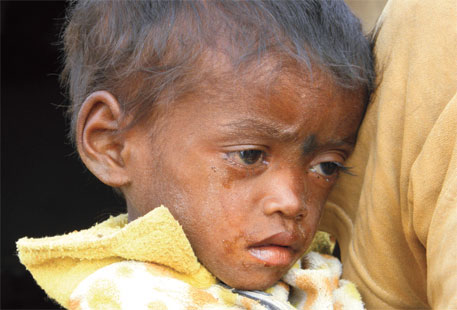 THE World Health Organization (WHO) formulated new guidelines on November 27 to treat children with severe acute malnutrition (SAM). These guidelines are to be used as an interim measure till the results of an inter-governmental study on malnutrition are out. The proposals, which see a shift from hospitalisation to home-based treatment for SAM, have been welcomed by public health experts and doctors in India. But the proposal to give ready-to-use therapeutic food, or RUTF, has drawn flak.

RUTF is a paste made of peanut butter mixed with dried skimmed milk, vitamins and minerals and can be directly consumed out of the pack. It is often given to severely malnourished children who are so thin that their mid-upper arm circumference is less than 11.5 cm.

The new guidelines supersede those issued by WHO in 1999, which recommended that severely malnourished children be hospitalised for treatment. The new guidelines propose that children who do not suffer from any medical condition that requires hospitalisation be treated at home with special foods that provide energy and nutrients. 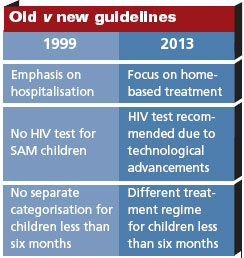 More than 90 per cent SAM cases can be comfortably treated at the community level. Every malnourished child is not sick. From our experience they look and behave normal except that their size is small,” says Umesh Kapil, professor of gastroenterology and human nutrition at AIIMS, New Delhi.

The new guidelines note hospitalisation of a child requires the mother’s constant presence. Her absence at home hinders household work, becoming a disincentive for hospitalised treatment. Also, scientific advancements like RUTF make treatment at home an easy choice. This eliminates multiple visits to hospital and associated risk of infections.

But the provision of RUTF has not gone down well with some health experts. Arun Gupta of the International Baby Food Action Network says, “We are against ready-to-eat food. The approach of providing RUTF to SAM children has not yielded results.” Kapil agrees. He says commercial organisations push for ready-to-eat food. “But fortified food given at home with milk and supplements should be emphasised,” he adds and explains that fortified food includes normal food with added micronutrients, like adding a multivitamin tablet in home-cooked food.

Harshpal Singh Sachdev, member of the Nutrition Guidance Expert Advisory Group, which formulated the new guidelines, disagrees and adds that there is no reliable data to compare home-cooked food with RUTF. “Any food given to a severely malnourished child will lead to weight gain. Without proper studies, we cannot say home-cooked food is the same as or better than RUTF,” he says. But a study by researchers from South Africa, published by Cochrane Database of Systematic Reviews, concludes that researchers did not find any difference in the clinical outcome of RUTF given at home compared to the standard diet.

The guidelines also propose the use of antibiotics like amoxycillin. But experts advise its judicious use. “It is a safe antibiotic though it can cause diarrhoea. It should be given only to a child who could be admitted to a health facility, but not routinely used in community-based management of SAM,” says Vandana Prasad of the National Council for Protection of Child Rights.

Whether the paradigm shift by WHO is the final word or not would be known in two or more years. “These are interim guidelines. We cannot come to a conclusion without proper data and evidence,” says Sachdev. The inter-governmental study, called the National Alliance for Severe Acute Malnutrition and funded by the Bill and Melinda Gates Foundation, will form the basis for a final set of measures to treat it.

In India, the study is being conducted in New Delhi, Udaipur and Vellore.

Guideline: updates on the management of severe acute malnutrition in infants and children

Levels and trends in child malnutrition