At least 17 people have been killed in Japan by powerful typhoon Wipha, according to media reports.

The typhoon hit Izu Oshima, an island south of Japan’s capital city Tokyo, on Wednesday morning. It threw life out of gear by causing landslides and flooding in the island. More than 80 centimetres of rain fell in a span of 24 hours in the island.

Around 50 people have been reported missing.  Japan Meteorological Agency had earlier called the typhoon as once-in-a-decade-event.

The typhoon has been downgraded to a “tropical storm” and is heading north-east. Reports also say that Fukushima nuclear plant, which was badly hit when a tsunami and an earthquake struck simultaneously in March 2011, did not face much damage. Nuclear plant authorities were quoted saying, “the typhoon has caused no new damage to the plant”.

It has also been reported that many houses have been buried in mudslides, triggered by the rain, trapping people underneath. Rescue operations are on and flights and trains in Tokyo have been cancelled. 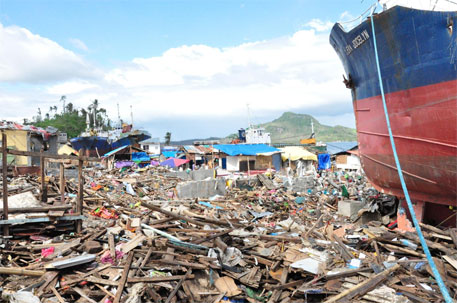