IN THE last week of April, the Gujarat government circulated a draft policy on pastoral land. The draft prohibits handing over of pastoral or gauchar land for industrial and other commercial purposes. This is unusual for a state, which had earmarked the same land for industrial uses. “If gauchar land is in the middle of an urban area, the government will denotify and sell the land and develop pastures at an alternative site,” says C L Meena, principal secretary, revenue department.

Rajasthan has taken a similar initiative to protect village common land. In November 2011, it became the first state to draft a policy for such land. Even before the draft is finalised, the state has issued orders to demarcate, develop and protect the commons.

Andhra Pradesh and Karnataka are doing the same. Fifteen other states are in various stages of declaring new policy and programmes for protecting village commons. This is all thanks to the Supreme Court order on freeing common land and property, like pastoral land and tanks, from encroachment and acquisition (see ‘Return of village land’, Down To Earth, February 16-28, 2011).

On January 28, 2011, the court directed all states to evict encroachers from village commons. “They (common property) were generally treated as inalienable in order that their status as community land be preserved,” the court noted in its ruling.

The order has spurred responses ranging from drafting common land policy to judicial orders on eviction of encroachers from commons. It is important because there has never been any focused attempt to protect and develop the country’s commons. In fact, there are no proper records of common properties which contribute substantially to local economy. The order came at a time when a large number of acquisitions of common land for infrastructure development is taking place in the country. Since 2002, the Centre has been trying to adopt a policy on common land but without any progress.

Following the apex court’s direction, there have been five high court orders either admitting cases against taking over of village commons or rescinding such takeovers.

An analysis by non-profit Foundation for Ecological Security (FES) shows 29 judiciary pronouncements and 29 government orders on commons have been issued since the apex court order last year (see map). “A key problem with common land is that no single department is responsible for it. Thus, it falls very low on the priority list of the bureaucracy. The Supreme Court’s judgement helped in creating urgency for action for securing commons,” says Jagdeesh Rao, head of FES. 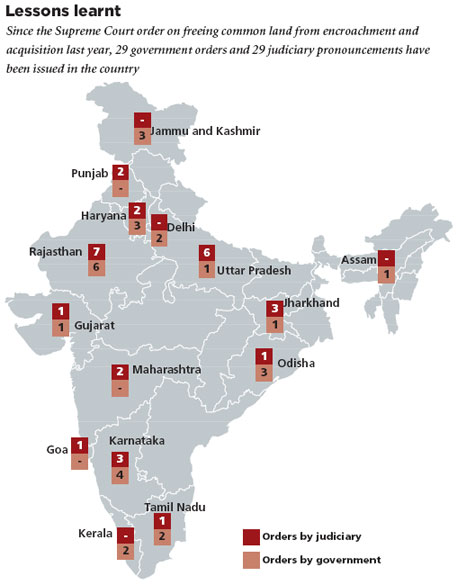 Facing some high-profile protests over common land acquisition, Gujarat has started compensating villages whose common land have been taken away: around Rs 23 crore have already been disbursed to create new pastureland. Without legal protection, village commons are shrinking fast. In the past three years, Gujarat has sold 116,000 square metres of such land for various purposes, leaving 424 villages without any pastoral land. The state has just one-fifth of its required pastoral land.

Rajasthan had enforced the apex court order in May last year and ordered works under the rural employment guarantee programme to be used for development of the commons. Under the policy, the state will transfer revenue wasteland to panchayats as grazing land.

Other courts, too, are taking cue from the order. In February, 2011, the Allahabad High Court ordered that a patch of three hectares in Chitrakoot be again recorded as a pond and given to the gram sabha. In the next three months, it gave similar verdicts in two other cases involving encroachment of two ponds on common land. In November, the Jharkhand High Court directed the state to make sure no more government land, which includes commons, is encroached upon.

Instances of communities using the order to assert rights over commons are also evident. On March 7 this year, the Goa High Court admitted a writ petition against diverting commons for real estate development. Residents of Moira village near Mapusa have used the order to free a large parcel of common land, called the comunidades in Goa, from the clutches of developers. Comunidades are in existence since the 11th century and are considered one of the best examples of community farming system. Under this, common land is leased for cultivation for three years. However, to cash in on the tourism boom, a nexus of revenue officials, panchayat members and developers has sold off such land parcels by terming them fallow.

The government’s newfound interest in commons could be due to political reasons. In states like Gujarat, Rajasthan, Andhra Pradesh and Odisha, communities have been protesting common land acquisitions for industrial use.

Gujarat’s draft policy on pastor land is perceived to win the support of communities for the ruling party as it goes to election this year-end. “Gujarat’s stand is puzzling as it goes against its own orders of 2005 for allocation of charagah and common land for corporate farming. There is pressure from the maldhari community,” says Rao. It may perhaps be a step to secure their votes, he adds. In Rajasthan, where a large number of people depend on livestock rearing, there have been demands from communities to free grazing land.

Bureaucrats Down To Earth spoke to see the apex court order a mixed judgement that gives the government the opportunity to deal with highly unpopular commons takeovers. C S Rajan, additional chief secretary of Rajasthan, says the state was already drafting a land policy on common land. “The order provided the right opportunity to push for it. For communities, it will be economically beneficial.”

However, the response to the order has not been uniform. Though the court ordered compliance report by May 2011, only four such reports have come to light. The court has not listed the case since its verdict. In between, it has admitted FES’ plea to be a party to the case in terms of helping with its expertise on the subject. Civil society groups complain the order has not been expanded to commons like forests. Whatever implementation has taken place lacks “the right spirit”, says Gautam Bandhopadhya, a forest rights activist in Chhattisgarh.

A senior official of Chhattisgarh says delay in following up the case will render the actions taken till now less meaningful. “There is already a strong lobby working against the apex court’s direction despite orders from the highest authority in states,” he says.