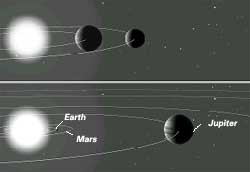 we may not be the only ones. With the discovery of a new planet, a team of astronomers has come a step closer to finding solar systems that might have characteristics similar to our own. The team recently found a Jupiter-sized planet in a circular orbit around a faint star called 47 Ursae Majoris, which is similar to the Sun and about seven billion years old. The planetary system in the Big Dipper constellation is about 51 light years from the Earth -- quite near by cosmic standards. "Of all the solar systems that have been found till now, this one looks most like ours," says Debra Fischer, a member of the research team and an astronomer at the University of California, Berkeley, usa .

The new planet is at least three-fourths the mass of Jupiter. It orbits the star at a distance that, in our solar system, would place it beyond Mars but within the orbit of Jupiter.It is the second planet to be found orbiting 47 Ursae Majoris. The other planet, detected in 1996, is believed to be more than twice the mass of Jupiter. The radius of its orbit is smaller than that of the newly discovered planet but greater than that of Mars. "When we discovered the first planet, I had never dreamt of finding another one orbiting the same star," said Geoffery Marcy, a member of the team. These two planets move around the star in nearly circular orbits unlike previously discovered planets. "Till date, most of the planets have been found in bizarre solar systems with eccentric and elliptical orbits. Such orbits tend to freeze and heat the planets to extremes of temperatures, thereby, resulting in conditions inhospitable to life," Fischer adds.

The new planet was discovered after monitoring the 47 Ursae Majoris for 13 years through telescopes at the Lick observatory atop Mount Hamilton in San Jose, usa. Astronomers detected it by measuring tiny wobbling motions of the star. As large planets revolve around their stars, they exert a gravitational pull that causes the stars to wobble. Astronomers detect the wobbling of the stars by measuring the Doppler effect, which is the change in the frequency of light waves received by the telescopes. The team, using three-metre and 0.6-metre telescopes, measured 47 Ursae Majoris's wobbles of 10.9 metres per second (m/s), thereby, inferring the presence of the new planet. The team was able to detect this planet now because of improved instrumentation that can measure wobbling motions as small as three m/s. "Since our observatories have improved, we are now seeing planets with longer orbital periods," said Fischer.

The fact that a Jupiter-class planet has been found with the right kind of orbit provides astronomers with some hope that our own solar system isn't unique -- some distant worlds might be suitable for life. Moreover, since the pair of planets revolves in near perfect circles around the star and orbits far enough away from it, intriguing prospects for astronomers have been raised: the space between the two might contain Earth-like planets , where water and possibly life might exist. Astronomers were quoted as saying that the possibility of finding smaller planets around 47 Ursae Majoris cannot be ruled out as large planets often imply the presence of smaller ones. "Finding the large ones is like finding boulders and rocks strewn along the beach from afar," said Marcy. However, Fischer is not so hopeful. She cautioned that "it could be difficult for an Earth-sized planet to have a stable orbit within the habitable zone because of the proximity of the two gaseous giants". A study of computer simulations of the two planets being conducted by researchers of the National Aeronautics and Space Administration (nasa) also points out the same.

The team has been instrumental in finding a number of planetary systems over a period of time. Besides Fischer and Marcy, it includes Steve Vogt of the University of California, Paul Butler of the Carnegie Institution of Washington and Gregory Laughlin of nasa . The team would now work on finding Earth-like planets in the 47 Ursae Majoris system. Fischer and her colleagues are hoping to install highly sensitive telescopes and detectors at the Lick observatory for discovering them. "If Earth like planets exist, it would require far more sensitive instruments to find them," opines Fischer. It would take several years for the astronomers to come to any conclusion. Even nasa is planning a spacecraft hunt for such planets. It will launch a project called Space Interferometry Mission in 2009 for this purpose.