Unseasonal rains damage crops estimated to be worth Rs 10,000 crore 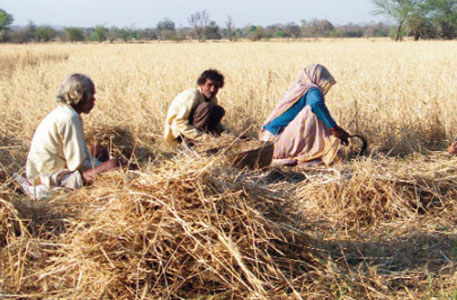 The unusual rains started around midnight on the intervening night of Saturday and Sunday and continued till Monday evening, damaging crops like wheat, mustard, pea and barley. The Union government has asked the impacted states to assess the total damage at the earliest. Union agriculture minister Radha Mohan Singh reviewed the situation with senior officials of his ministry.

Rabi crops are grown mid-November to April. The main Rabi crop is wheat.

According to a senior government official who is involved in initial assessment of damage of crops, up to 20 per cent of total production could have been damaged.

“The initial figures that we are getting from the states are indicating up to 20 percent of total Rabi crops have been damaged. Mostly, it is the wheat and mustard crops that have been damaged,” says the official on condition of anonymity. “The total cost of damage could be around Rs 10,000 crore,” he adds.

States like Punjab and Haryana, which produce the largest amount of food grains in the country, also faced the fury of the unseasonal heavy rains. These two states have about 3.5 million hectares and 2.5 million hectares of area, respectively, under wheat cultivation in the current Rabi season.

“About 10-20 per cent of the crop which has got flattened may get damaged. There has been lodging in timely sown wheat crop because of ongoing rains and strong winds,” Indu Sharma, director of Indian Institute of Wheat & Barley Research, told PTI.
“Rains would not affect crops as much as the strong winds,” says Umendra Dutt of Kheti Virasat Mission, a Punjab-based non-profit working on organic farming.

It is double whammy for farmers in Maharastra who are yet to recover from drought following last year’s deficit monsoon.
Devendra Fadnavis, chief minister of Mahrashtra, has ordered divisional commissioners and district collectors to assess the total damage to crops at the earliest.

State minister of revenue and agriculture, Eknath Khadse, also asked his department officials to inspect and assess damage of the crops at earliest.

The heavy downpour with winds on Monday reportedly damaged standing crops like wheat, groundnuts, cotton and onion, especially in Saurashtra region. The state government has been ordered to assess exact damage to Rabi crops.

Impact of global climate change on agriculture and allied sectors in India: Standing Committee on Agriculture (2008-09)