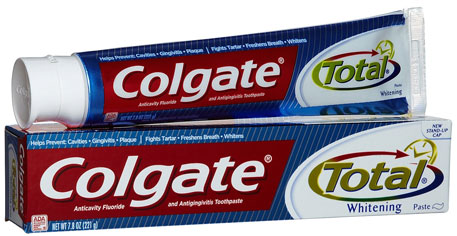 Triclosan, an anti-bacterial chemical that has been linked to cancer and growth malformation in animals, is used in Colgate Total toothpaste. Colgate says the product was approved by the United States Food and Drug Administration (USFDA) in 1997, but a report published in Bloomberg says the clearance granted by FDA was based on studies provided by the company.

The documents submitted by the company to FDA to get clearance for the paste as an over-the-counter drug were not available earlier and have been released by FDA in response to a lawsuit on a Freedom of Information Act request. The issue has raised questions not only on the safety of the product, but also over FDA processes, say media reports.

The released documents cite studies on the effects of the chemical on animals. According to a report published in the DailyMail, FDA had raised concerns that the chemical could increase the risk of cancer but Colgate said triclosan was harmful only in large quantities. The report says “Despite evidence–including pages in the report showing how tests found fetal bone malformations in mice and rats–Colgate deemed the results irrelevant because they were conducted on animals.” The report adds that Colgate has no plans to “reformulate” the toothpaste.

FDA, however, appears to be having second thoughts on the safety of the chemical. “Triclosan is not currently known to be hazardous to humans. But several scientific studies have come out since the last time FDA reviewed this ingredient that merit further review,” says the USFDA website.