What drains mean to cities 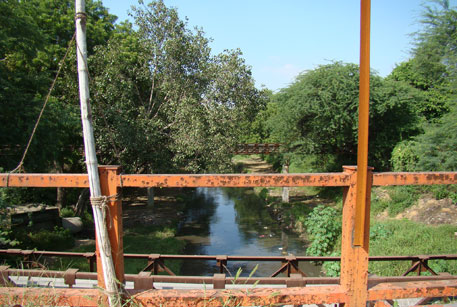 The National Green Tribunal (NGT) has recently directed the municipal bodies of Delhi and other authorities responsible for maintenance of stormwater drains to protect them from encroachment and pollution. NGT has also come down heavily on hospitals for releasing toxic pollutants into stormwater drains. The tribunal's order came in response to a petition filed before NGT by Manoj Mishra, a retired Indian Forest Service officer, and Madhu Bhaduri, a former diplomat, opposing covering of stormwater drains.

The plea by Mishra and Bhaduri stems from the fact that cities face water logging problems as soon as the monsoon arrives because of unplanned urbanisation. As a city grows, high rates of development lead to loss of soft landscape that allows surface runoff. To worsen the situation, stormwater drains, designed to tackle intense rainfall, remain clogged with garbage and sewage, or simply do not exist because of encroachment. So the city gets deluged even it receives less-than-normal rainfall.

But instead of reviving the drains, the government has asked cities to use high-end technologies, pipes for instance, to divert rainwater to nearby rivers or seas using funds from the Jawaharlal Nehru National Urban Renewable Mission (JNNURM). But that is not the right way. In the present scenario when cities are extracting huge quantities of ground water and lakes are disappearing, we should use the runoff flowing through stormwater drains to recharge the groundwater.

Indian cities have traditionally been managed by stormwater drains, which offered the twin benefits of drainage and rainwater harvesting. By the 1860s, Bengaluru had evolved an intricate system of harvesting rainwater. Laid out in 1866 by then commissioner of the city, Lewing Bentham Bowring, these drains carried rainwater to outlying tanks. But modern Bengalru discounted this security and is now grappling with severe water shortage. So is Chennai, which has traditionally depended on temple tanks, or kulams, for harvesting rain. There are 39 kulams in Chennai, each spanning 0.4-2.8 hectares (ha). The kulams also act as flood-control devices. Lately, the natural course of stormwater drains, leading to these kulams, has been changed due to unplanned settlement near the catchment areas. The drains now flow directly to the sea without filling the tanks. Stormwater channels also formed an integral part of the forts and palaces of desert cities of Rajasthan. Jaigarh fort in Jaipur is a classic example of this. The fort has three underground sumps, which stored runoff rainwater drained from the Aravallis through well-designed channels. The fort still uses the stored rainwater during peak water scarcity periods in summer.

But the traditional system has taken a backseat due to unplanned development. Lakes and ponds no more exist in cities. In the beginning of 1960, Bengaluru had 262 lakes. Now, only 10 of them hold water. In 2001, when the collector of Ahmedabad listed the waterbodies in the city following a high court order, he found that 65 of the 137 listed lakes were encroached. Cities are also replacing the permeable land with impervious surfaces. The problem gets aggravated by the fact that drains do not have sufficient slope to draw water from surface water and channelise it. This results in water-logging.

But instead of reviving drains, the government is further encroaching on them. Delhi is a classic example of this. The capital city has as many as 22 stormwater drains, of which only a few are natural, and the rest are man made. Encroachment and pollution are common features of these drains. Yet the Delhi government plans to cover a large part of the Shahdra link drain to build another Dilli Haat, an open-air market for craftspersons. The South Delhi Municipal Corporation plans to build a parking lot over the Kushak drain and has already covered 15 per cent of the drain. The Delhi Development Authority has also covered 95 per cent of a drain in Defence Colony.

Similar encroachments of the seasonal Mithi river in Mumbai had led to a serious water logging problem in the country’s finance capital in 2005, but it seems the government did not learn any lessons from the deluge.

The loss of stormwater drains in urban areas lead to twin problems of reduced groundwater recharge and water-logging. This can be solved by integrating green infrastructure into the stormwater management process.

Some of these best management practices to reduce the runsoffs are green roof, filter strips, rainwater tanks and cisterns, permeable pavement, grass channel, bioretention ponds and swales. Many countries have taken up these initiatives and have also incorporated these practices as part of their policies. Consider, Santa Monica in USA, which has a law that all newly developed or retrofitted developments need to manage 80 per cent of stormwater runoff from impermeable surfaces. If the developer fails to tackle this then he needs to pay the retention fees which is used by the city to retrofit streets, parks and other sites for better management of urban runoff. Germany collects rain taxes for the amount of impervious surface cover on a property, which generates runoff and directed to the local stormwater channel. So, more the rainwater is caught and conserved, less is the runoff added to the storm drains. Less runoff allows for smaller stormwater channels, which, in turn, saves construction and maintenance costs at the site. Thus people get rain tax reductions by converting their impervious pavement into a porous ones. In Germany, adoption of transparent surface water drainage charges and subsidies has encouraged a high amount of retrofitting of sustainable urban drainage (SUDS), particularly green roofs and water reuse systems. 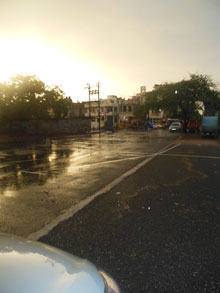 In India, there have been sporadic efforts in this direction. In 2012, the Jaipur Development Authority (JDA) planned a conventional dense graded asphalt parking lot at the Gandhi Nagar railway station. The authorities decided to include an experimental porous asphalt area (about 340 sq m) as part of the parking lot. JDA planned to harvest rain through this porous asphalt area. Porous asphalt pavement, also referred to as permeable pavement, contains pores or separation joints that allow water to flow through and seep into the soil, thereby reducing the runoff. The two types of parking lot pavements were divided by constructing a cement concrete partition wall. During the monsoon of 2013 a clear distinction was observed between these two types of pavements. While the porous pavement absorbed the rainwater, the conventional pavement allowed the runoff to flow over it.

Another such example can be seen at the National Geophysical Research Institute (NGRI) in Hyderabad's Uppal Road. Huge amounts of runoff used to flow out of the three  ha complex each year and load stormwater drains, which get choked during peak monsoons. In 2007, NGRI scientists planned to install groundwater recharge structures in their campus. They opted for structures suitable in the red soil of the area and also which could improve their landscape beauty. They constructed nine rainwater harvesting ponds (rain gardens) to catch runoff. Each garden is 40 sq m in area and is circular in shape. Nine ponds have the capacity of holding 180 cum of rain. 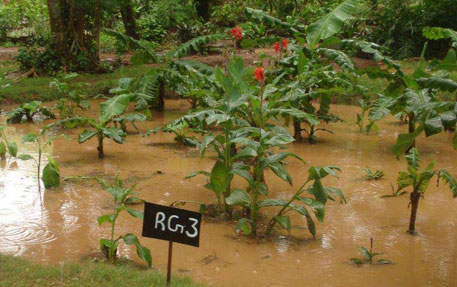 The ponds are dug up to 0.4 m to increase infiltration. River pebbles are placed on the drains around each pond. These drains catch surface runoff and reduce their velocity, and thereby remove suspended particles. The sediment free water then enter the ponds. Local plants in the ponds, for example maiden hair fern, lilies, wild ixora, heliconias, cannas, lemon grass and bananas, remove the dissolved contaminants. The water in the ponds get percolated within 8-10 hrs. There has been practically no surface runoff leaving the rain garden. The groundwater level in the region has risen by 1.5 m.

India receives most of the rainfall in just 100 hours and it is important to catch this water for water security throughout the year. There is also a need to manage the runoff flowing through the stormwater drains in cities to avoid water-logging. There is a need that the building rules and codes reflect the maximisation of on-property stormwater use wherever possible. The city corporations should have infrastructure proposals in accordance with the relevant adopted stormwater management plan. The city engineers should work with the builders and the developers to agree on suitable stormwater management strategies. They should work in such a way so as not to overload any previously adequate downstream system.

Order of the National Green Tribunal regarding storm water drains in Delhi, 18/03/2014

Order of the National Green Tribunal regarding drainage system, Delhi, 03/03/2014

Order of the National Green Tribunal regarding encroachment of drainage system in Ghaziabad, 03/03/2014

Order of the National Green Tribunal regarding Environmental Clearance for project located at the Najafgarh drain Basin, 05/02/2014

Order of the National Green Tribunal on covering of open drains, Delhi, 28/10/2013