Traders have already placed orders for importing 100,000 tonnes from Australia 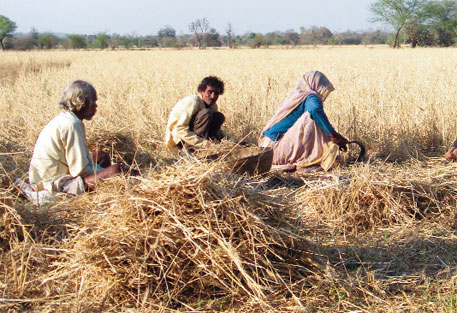 The unseasonal heavy rains and hailstorm of March and April this year, which left millions of farmers in north India in distress, may impact international wheat prices. Indian traders, especially from south India, have started importing wheat from Australia and other parts of world in the wake of poor yields in India and lower international price. These imports may push up the international wheat price as happened in 2010.

In 2010, India imported 200,000 tonnes of wheat because of widespread drought, which led to a global food crisis as international prices increased. This year also, traders have placed orders for nearly 100,000 tonnes of wheat from Australia, according to the Roller Flour Millers Federation Of India. Experts say this figure may touch 1.5 million tonnes.

The unseasonal rain and hailstorm in India this year damaged rabi crops, wheat especially, in nearly 180,000 hectares. Wheat crop production this season is projected to decrease by nearly 4 million tonnes, according to the Union Ministry of Food and Consumer Affairs.

The United Nations’ Food and Agriculture Organisation (FAO) has said total production of wheat in India would be around 92 million tonnes, which is nearly 3 million tonnes less than last year.

Abdolreza Abbassian, Rome-based senior economist and grain analyst at FAO, however, says the current trend of import is not going to impact the international market significantly.

“I don’t think even large wheat purchases by India from international markets could have much impact on world markets given the prevailing supply condition which is ample,” Abbassian told Down To Earth.

“The situation of year 2010 was different when India had drought and supply was not comparatively ample,” he added.

The forecast of deficit monsoon because of a developing El Niño  is another issue of concern for the policy makers. It may lead to a drought-like situation again.

“We are closely monitoring the situation of India,” Abbassian added.

Why imports are increasing

For food importers in India, it is the quality of wheat that matters most.

“The international price is so low that even good quality of wheat is affordable for us. Now traders have placed orders to Australia. They are also eyeing CIS countries where wheat is cheaper in comparison to Australian wheat,” says Ajay Goyal, president of Maharashtra unit of Wheat Flour Mills Association.

“It is proving cheaper than what we import from north India,” says Jitendra Gupta, president of Telangana unit of Wheat Flour Mills Association.

These traders are serving food processing industries and do not want to compromise on quality of wheat. Till last year, these traders were largely importing high grade wheat, called lokwan, which is grown in Madhya Pradesh’s Malwa region, Rajasthan and Gujarat.

“But this time quality of the high grade wheat has been affected by rains, so we are importing it,” says Ashish Pandey of Louis Dreyfus India, an international grain trading agency.

Besides quality concerns, traders are also deterred by high transportation cost of wheat within India.

“Even If we get good quality of wheat at lower price from north India the transportation cost will not make it viable. The nearest port is Mundra or Kandla and the cumbersome process of loading and unloading issues do not allow traders to go for it,” says Goyal.

“Even supply from goods train is proving costly,” he adds.