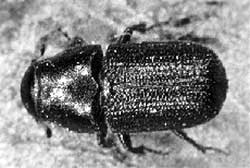 according to recent reports, the mountain pine beetle epidemic in Canada threatens around us $3.81 billion in lumber in British Columbia's forests. Eight million hectares of lodgepole pine trees are being infested and killed by the beetle, thanks to four years of warm winters in British Columbia, Canada's largest lumber producing province. Researchers say that the infested area is 80 per cent larger than last year.

The epidemic has hit the province's lumber producers at a time when the us has imposed trade sanctions on Canadian softwood lumber shipments. And although lumber producers are chopping down the infested trees, they are aware that to actually stem the spread this winter should produce enough cold weather to kill the insects. "We can slow it, but we can't arrest it," said Greg Jadrzyk, of the Northern Forest Products Association, which helped fund the study for the province.

As environmental groups may oppose proposals to use clear-cut logging in areas of heavy infestation, loggers are left with no option. They are urging Ottawa for financial aid to fund "an aggressive silviculture" programme in older areas of the infestation, where trees are already dead. This is the only way the affected forest areas can be regenerated.