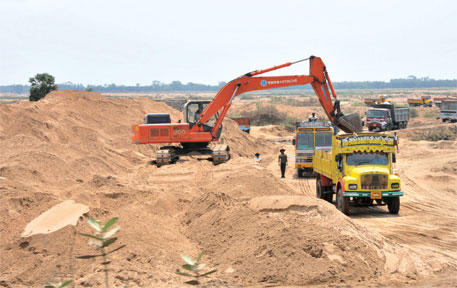 KULITHALAI IS a small town on the bank of the Cauvery in Tamil Nadu’s Karur district. Here the river flows the widest, with its banks 1.5 km apart, and is called Akhanda Cauvery. In May, when the flow is lean, the sand bed is exposed in most stretches of the river. Heavy cranes are at work. They dig their metal arms deep into the riverbed, scoop out sand and load it onto trucks waiting in line. A walk around the area presents a sordid picture: at many spots farmlands that were once used to cultivate crops are now used to stock sand. Each sand quarry has 20-25 musclemen on guard throughout the day. They intimidate and assault anyone who pauses to click a photograph. On May 22 this year, this correspondent was forced to delete the pictures from her camera while capturing sand mining. She was later chased by thugs in a car for at least an hour.

Kulithalai is one of the places in Tamil Nadu where sand mining has been taking place for years. About 60 per cent of the state’s sand requirement is met by the quarries in the basins of the Cauvery and its tributaries. Those fighting illegal sand mining claim that mining takes place day and night with six-eight machines in each quarry.

At least two-thirds of the trucks engaged in sand mining operations do not have government permit. Moreover, no government official is present at the quarry after 5 pm. Due to these illegalities, the riverbed in the Cauvery basin has gone down by 8-10 metres over the years. “Cauvery sand is of high quality, so indiscriminate mining has been going on for the past many years,” says N Natarajan, former chief engineer at PWD and expert on the Cauvery.

Unlike other states in India, sand mining is undertaken by the government in Tamil Nadu. All the sand quarries in the state are under the direct control of the state Public Works Department (PWD). This has been the practice since October 2003 when the state administration, led by J Jayalalithaa, abolished sand mining by private contractors. “The government was forced to do so after an expert committee appointed by it under a court order found that indiscriminate sand mining by private players since 1989 had caused huge damage to the ecology, environment, water resources, agriculture and livelihood of people,” says Christina Samy of Karur-based non-profit, Society of Women in Action for Total Empowerment.

The expert committee formed in 2002, which included ecologists and geologists, observed that sand mining as carried out by private contractors was haphazard and chaotic. It claimed that mining led to erosion of river banks, widening of rivers and depletion of ground water, damaged civil structures like bridges and affected drinking water and irrigation projects. The committee recommended a single government agency to ensure that sand mining is scientific and sustainable. Subsequently, the state government amended the Tamil Nadu Minor Minerals Concession Rules, 1959, and made PWD responsible for sand mining.

The government took up the responsibility in order to curb illegalities, augment state revenue and ensure uninterrupted sand supply to the people at affordable prices. A decade later, the situation has hardly improved. Activists allege the situation has worsened. The government’s failure has not only destroyed the ecology of the river basin and affected livelihood, but has also cost the state exchequer crores of rupees in the past 10 years.

Every sand quarry in Tamil Nadu has an environmental clearance from the State Environment Impact Assessment Authority (SEIAA). “These quarries violate the Tamil Nadu Minor Minerals Concession Rules, 1959, and the guidelines issued by the Ministry of Environment and Forests on December 24, 2013, besides a few court judgements regarding sand mining,” says R Nandakumar, a lawyer from Kulithalai who has been fighting against illegal sand mining for the past two decades.

As per the orders of the government, sand should not be mined beyond a depth of 1 metre; quarrying is allowed only from 7 am to 5 pm; a truck should not be loaded with more than two units of sand (1 unit=2.83 cubic metre) per trip; the connecting roads to the riverbeds should be constructed with sugarcane leaves and biodegradable material; all quarries must have an assistant engineer of PWD to monitor mining. In 2010, the Madras High Court ruled that only two machines should be used in each quarry, one for lifting sand and the other for loading it onto the trucks. These rules are hardly followed.

This year, the high court on April 30 and the Supreme Court on May 9 banned in-stream mining in 18 of the quarries in the Cauvery basin. “The government and the contractors do not give a damn to these rulings,” points out ThirumalaRajan, a lawyer at the Madurai Bench of the Madras High Court.

Although the environmental clearances by SEIAA are in the name of PWD, the department signs contracts with private parties for lifting and loading sand as the state does not have enough equipment. The contract from 2003 to 2013 was given to the associates of O Arumugasami, a Coimbatore-based businessman. The contractors are also permitted to set up sand stockyards that act as second sales points. They buy sand from the government at Rs 1,000 for a truckload, but sell it for Rs 4,500 per truckload. “Whenever common people go to quarries to get sand, they are directed to the stockyards,” says Nandakumar. By the time the sand reaches other districts, its price increases to Rs 15,000-Rs 20,000 per truckload.

“It is the sand contractors who rule the state. The successive governments in the state and political parties are hand in glove with them,” points out L A Samy, convener of Forum for Protection of Water and Livelihood Resources, an umbrella organisation opposed to indiscriminate sand mining in the state.

To clarify the allegations against the government, Down To Earth contacted five engineers at PWD who spoke on the condition of anonymity. Three of them outrightly rejected all the allegations against the department. They say PWD is a government agency and all the quarries function as per rules and regulations. They assert that only two machines are deployed in every quarry and sand dunes on the riverbed are removed to ensure smooth flow of water. 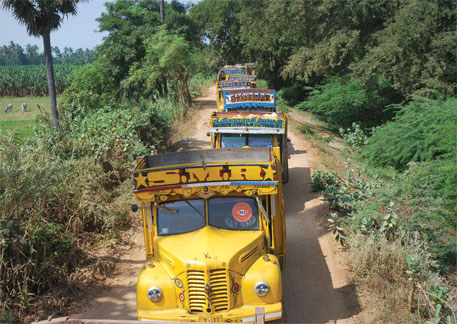 The other two engineers admit to gross irregularities in sand mining and claim that everybody from the district collector to the police is aware of this. They, however, add that PWD officials are helpless as the department is made a scapegoat by the government and political parties that collude with contractors. “PWD can only mine and sell sand but does not have the power to penalise those who commit illegalities. For that, the department has to inform the revenue officials, police and district collector. But whenever there is a scam, it is the PWD officials who get suspended,” they say. It is a double whammy if the officials speak to the media or raise their voice against the illegalities. “The moment they speak up, they will be replaced by those who will dance to the tune of political leaders and contractors,” says A Veerappan, a retired PWD chief engineer.

Green lawyers point out despite environmental clearances, sand quarries lack scientific mining plans. In 2012, the Madurai Bench of the Madras High Court had ordered the closure of more than 35 quarries in the Cauvery basin, including all seven quarries in Karur. “Whenever a quarry is closed after years of struggle and prolonged legal battles, another quarry comes up nearby within no time,” says R Karikalan, a farmer from Karur.

K K N Rajan, state vice president of the Tamil Nadu Water Supply and Drainage System Employees’ Union, estimates that illegalities in sand mining have cost the state exchequer a loss of Rs 30,000-Rs 50,000 crore. “This looks like a huge scam and the matter should be investigated by an independent agency,” he adds.

The Cauvery and its tributaries are the lifeline of at least 10 districts in Tamil Nadu. The rivers were perennial till two decades ago. “We used to grow paddy, turmeric, sugarcane, sunflower and other crops with the water from the rivers,” says R Ramasami, a farmer from Karuppampalayam village in Karur. Now the rivers remain dry for half the year and the groundwater level has gone down, Karikalan explains. Many farmers in the region have sold or leased out their farmlands to sand contractors to be used as stockyards. GopalaDesikan, joint secretary of the Cauvery Delta Farmers’ Welfare Association, points out that the irrigation canals in the area have been rendered useless. “Due to rampant sand mining,the river bed has gone down, hampering the water flow through the canals,” he says.

Nandakumar says the government’s failure to check illegal sand mining has not only threatened the Cauvery, but all river basins in the state. “It is becoming increasingly difficult to resist the sand mafia which is backed by the government and political parties. Even the people are divided on the issue as many youth are employed by the mafia,” he adds.

Retired PWD engineers and green lawyers feel a moratorium on sand mining should be imposed until scientific auditing of sand and assessment of ecological damages are done. They also demand investigation into the loss of revenue. A few other measures proposed include a separate sand budget every year, maintenance of sand stockyards by the government instead of private parties, state permits to trucks involved in mining operations, manual mining of sand and a committee under a high court judge and other specialists to monitor sand mining.