The plant will contribute towards the country’s renewable energy target of 3,725 MW 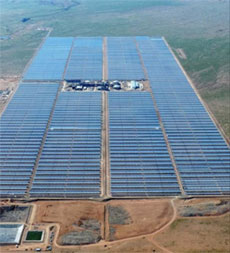 South Africa last week commissioned a 100 MW Concentrated Solar Power (CSP) plant—KaXu Solar One—which has 2.5 hours of thermal storage. The plant is located near the town of Pofadder in Northern Cape province and is capable of providing renewable power to 65,000 households or 325,000 South Africans

Abengoa Solar, along with Industrial Development Corporation (IDC) of South Africa, commissioned KaXu Solar One on March 2, 2015. Minister of economic development, Ebrahim Patel, inaugurated the power plant. The solar field is spread across one square kilometre with close to 1,200 parabolic trough collectors. Each collector in the field comprises of 10 modules, and each module has 28 mirrors. In all, there are 336,000 mirrors on the plant which use the heat of the sun to produce electricity.

Manuel Sanchez Ortega, vice president and CEO of Abengoa, said, “We are proud of the role we are playing to help South Africa meet its ongoing energy demands. This project will leave a legacy that will benefit the community of Pofadder, Northern Cape and the entire country."

KaXu Solar One also incorporates a storage system that would enable the plant to operate for additional 2.5 hours in absence of solar radiation. This storage system is based on molten salts technology which is the most commonly used technology for thermal storage in the world.

The project is jointly owned by Abengoa (51 per cent stake), IDC (29 per cent) and KaXu Community Trust (20 per cent). The estimated project investment is about $1 billion, the majority of which was provided by several banks including the International Bank for Reconstruction and Development (IBRD), the International Finance Corporation (IFC), and the European Investment Bank (EIB). IDC Chief Executive Geoffrey Qhena said, "The project is based on a strong public-private sector partnership and forms part of our efforts to support government's initiatives to introduce alternative sources of energy into the country's energy mix as contemplated in the integrated resources plan."

Abengoa secured this project during the first auctions of the Renewable Energy Independent Power Producers Procurement Programme (REIPPPP). This programme has been designed so as to contribute towards the target of 3,725 MW and stimulate the renewable industry in South Africa.

During the 3 auctions under the REIPPP, the South African government has allocated 60 projects. The majority of these projects (35) would be based on solar photovoltaic technology with a cumulative generation capacity of 1,540 MW. Five solar thermal power plants have also been allocated with a total capacity of 400 MW. Of the 4 CSP projects whose information is available, 3 have been allocated to Abengoa Solar.