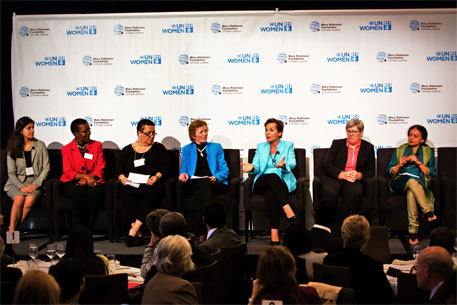 The forum held on September 23, a day before the UN secretary-general’s Climate Change Leadership Summit, and conceptualised as a mobilisation platform highlighted the integral relationship between gender equality, women’s leadership, and climate justice and solutions.

“Women and girls are on the front lines of climate change and UN Women hosted this event to carry forward their perspectives to the Climate Summit,” said Mlambo-Ngcuka.

Mary Robinson, former UN high commissioner for human rights, believes that any climate issue must consider the voices of women, young people and the poorest. According to her, climate change is not just an issue of atmospheric science but of human rights and fundamental justice. “The leaders must think about the injustice of how climate is affecting those who are least responsible,” she said in a UN press statement released on September 22.

Current and former women heads of state and government, ministers, leaders from grassroots, youth and indigenous organisations, civil society, the private sector and the scientific community, and the UN system came  together to demonstrate women’s leadership on climate action and highlight gender-responsive actions at all levels.

UN Secretary-General Ban Ki-moon appreciated this event as an important contribution to objectives of the summit and called for recognition of women’s leadership in all climate change agreements.

By women, for women, for climate justice
This global forum of women leaders is expected to be an important contribution to the commemoration of the 20th anniversary of the adoption of the Beijing Platform for Action (Beijing+20),  a critical opportunity to position gender equality, women’s rights and women’s empowerment at the centre of the discussions on climate change and sustainable development in the post-2015 development agenda and the elaboration of http://www.indiaenvironmentportal.org.in/content/395789/the-millennium-development-goals-report-2014www.indiaenvironmentportal.org.in/content/395789/the-millennium-development-goals-report-2014

“Voices from the Frontlines”, a thematic session of the UN Climate Summit 2014 organised by UN Women and UNICEF, too, contributed towards voicing women’s perspectives and participation for climate justice and policy developments.

Robinson, who participated in this UN event, too, as a panellist, called for special efforts focused on adaptation to secure the future – “a future that has renewable energy, zero carbon emissions, and better health, better light, better energy, better job prospects for everybody “.

These global forums and events organised by women leaders have been successful in bringing into limelight the efforts needed at the international and national levels to develop innovative, sustainable and inclusive responses to the climate challenges focused on women.

The women leaders have called for the “political leadership and a long term vision at all levels” and want their voices to be heard by this UN Summit and also carried forward in forthcoming global climate negotiations in Lima.  and Paris too.

Lakshmi Puri , assistant secretary general, UN Women, demanded better integration and better linkages between gender equality, women empowerment and climate action. She asked the world leaders to commit to higher ambitions on climate actions and higher ambitions to ensure women’s needs and interests are addressed and their agents and their leadership needs are harnessed.

This set of videos capture messages by women leaders at the UN climate summit, 23 Sep 2014

Beijing Declaration and Platform for Action: The Fourth World Conference on Women

The state of human development in the Pacific: a report on vulnerability and exclusion in a time of rapid change

Governing climate funds: what will work for women?