UN calls for protection of rights of women, indigenous peoples 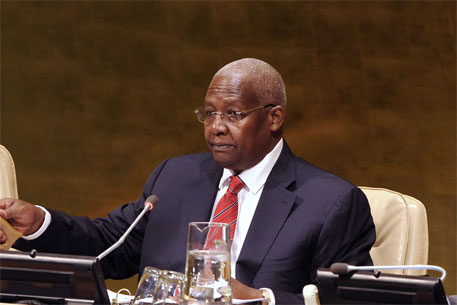 The 193-member-strong United Nations renewed its pledge for gender equality, as also the promise to strive for the dignity of the human population, in its annual meeting. The 69th session of the UN General Assembly (UNGA) began at the UN headquarters in New York on September 16 and will conclude on October 1. World leaders have gathered in New York to deliberate on a number of issues that are crucial for global development. This year will feature debutants like Prime Minister Tony Abbott of Australia, Narendra Modi of India and the Ukrainian president, Petro Poroshenko.

The current UNGA session marks 20 years of the landmark International Conference on Population and Development (ICPD) that was signed by 179 governments in Cairo in 1994. ICPD placed people at the centre of development and emphasised that population is not just about counting people, but about making sure that every person counts.

Ban Ki-moon urged world leaders to intensify efforts to achieve the Millennium Development Goals by the 2015 deadline. “We have to remember the vision of Cairo, especially the priority it placed on reproductive health,” the UN chief said, calling for urgent action to protect women.

The 2014 MDG Report gives hope as it says most of the goals have already been met or are within reach by 2015 (Read: MDG Report 2014: India among worst performers in poverty reduction, maternal death and sanitation. But official figures, particularly on reproductive health of women, continue to be alarming. According to the UN, close to 800 women die each day globally from causes related to pregnancy or childbirth, while an estimated 8.7 million young women in developing countries resort to unsafe abortions every year. India is among the worst performers in maternal and child health in South Asia (Read: India among worst performers in maternal and child health. The report also states that the maternal mortality rate in the developing countries was 14 times higher than that of the developed world.

‘Indigenous people important’
On the sidelines of the UNGA meet, the first World Conference on Indigenous People, a high-level plenary meeting, kickstarted on September 21. The two-day event brought together over 1,000 indigenous and non-indigenous delegates who were provided a platform to share their perspectives and best practices on the realisation of their rights. Indigenous people make up more than 5,000 distinct groups in around 90 countries of the world—five per cent of the global population or 370 million people.

Ban Ki-moon, who inaugurated the conference, said its success was integral to the progress of all humanity. “Indigenous peoples are concerned about issues that top the global agenda. They are deeply connected to Mother Earth,” he said.

Kutesa agreed that more could be done at the national level to improve the conditions of indigenous peoples as there continues to be a “deep chasm” on the ground between commitments and reality. “The UN Indigenous Peoples’ Declaration represents a global consensus and has galvanised international attention towards the rights of indigenous peoples, but the Conference takes it further,” he said.

Addressing the delegates, Ban Ki-moon recalled his meeting with indigenous leaders in Costa Rica, where they shared with him their worries about land, resources and their rights, says a press release. During his visit to New Zealand last month, the UN chief spent a day in Tuapo with Maori leaders. “I was impressed with their multimillion dollar horticulture, waste management and energy production companies. I will never forget how every bit of waste is fed to worms that create very rich organic fertilisers. This is sustainability in action. It showed how much the world can learn from indigenous peoples,” he said.