AFTER 19 months of intense negotiations between the ruling United Progressive Alliance government and opposition parties, the Land Acquisition (Rehabilitation and Resettlement) Bill of 2011 is close to being passed by Parliament. On April 18, the government claimed that all major political parties have reached a “broad consensus” on the Bill. Though several political parties, including the four Left parties, still have apprehensions and oppose the Bill in its current form, the main opposition Bharatiya Janata Party (BJP) has declared support after the government accepted two of its key suggestions.

The Bill will be tabled in the budget session that resumed on April 22.

It aims to fill major lacunae in the existing Land Acquisition Act of 1894, framed during the colonial era, by introducing provisions for resettlement and rehabilitation of families whose land is acquired by the government for development purposes.

The two new provisions to be added to the Bill aim to provide further protection to land owners.

One provision resists land acquisition. It says the landholders should have the right to lease their land to developers instead of giving away their ownership. It enables state governments to enact laws in this regard as leasing of land is a state subject. At present, the government acquires land and gives it on lease to developers, and the farmer becomes landless. Analysts say the provision will allow farmers to retain ownership over land while earning a steady annual income by leasing it to companies. 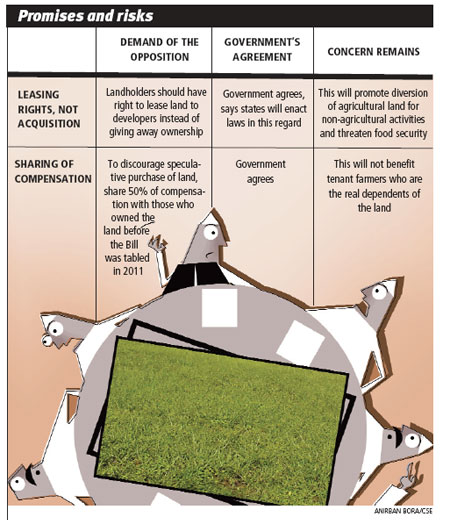 The other provision says if the government acquires land that changed hands after the introduction of the Bill on September 5, 2011, the compensation amount would be divided equally between the current landowner and the original landholder. There have been reports of large-scale speculative purchase of land to reap high compensation amount the Bill promises. Unlike the existing Act which compensates the landholder at the prevailing market rate, the Bill offers compensation at double the market price in urban areas and four times the price in rural areas.

Experts say the two suggestions are in “immediate” interest of farmers but they do not deal with the larger issue of displacement, food security and widespread acquisition of fertile and tribal land. “The right to lease is in the interest of farmers. But it encourages acquisition of fertile land,” says Madhuresh, organiser of the National Alliance of People’s Movements. A farmer will not fear losing ancestral land and lease it out to get yearly benefit from it. This will promote diversion of agricultural land for non-agricultural activities and threaten food security, he adds.

Sivaram Krishna of Sakti, a non-profit in Hyderabad, says the provision of sharing compensation with original farmers who sold land after introduction of the Bill will not benefit tenant farmers, who actually depend on the land for living. Except for West Bengal and Andhra Pradesh, no other state has proper records of their tenant farmers, Krishna adds.

Analysts say the government must address these concerns before going ahead with the proposed law, particularly at a time when it is talking about food security and plans to table a bill in this regard.