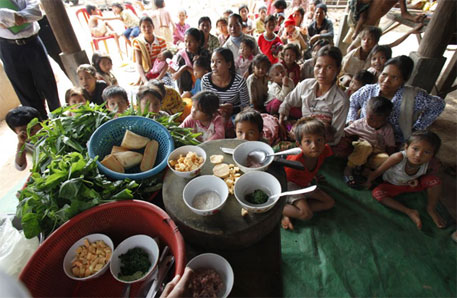 The fighting in Gaza between Israel and Hamas has severely affected agriculture and livelihoods and recovery in the long run will be no easy task, warns the United Nations’ Food and Agriculture Organization (FAO). Many farmers and herders have been forced to abandon their lands and fishing activities have been paralysed, which has brought down the local food production.

The Gaza Strip imports most of what it eats, but locally produced food is an important and affordable source of nutrition for the people. According to FAO estimates, close to 28,600 households in Gaza rely on farming, livestock and fishing for their livelihoods.

The latest update by the Food Security Sector (FSS), coordinated by FAO and the World Food Programme (WFP), says that Gaza has lost half of its population of poultry birds either due to direct missile hits on their shelters or lack of water, feed or care resulting from access restrictions.

An FAO report says that the recent fighting has damaged 17,000 hectares of croplands in Gaza, as well as much of its agricultural infrastructure, including greenhouses, irrigation systems, animal farms, fodder stocks and fishing boats.

Last week, Israel and Gaza agreed to a five-day ceasfire brokered by Egypt. The truce is set to expire today. Ciro Fiorillo, head of FAO’s office in the West Bank and Gaza Strip, says that military operations prevented detailed assessments of damages to agriculture. “With the latest ceasefire holding, a series of field visits to agriculture sites has been initiated under the leadership of the UN Office for the Coordination of Humanitarian Affairs and with FAO and other FSS partners,” he adds.

The ceasefire may have allowed many farmers to access their lands for a brief period; however, resumption of food production faces serious obstacles in the face of shortage of water, electricity, inputs and financial resources, as well as ongoing uncertainty regarding the possible resumption of military activities”, Fiorillo says.

According to the report, food prices in Gaza had been fluctuating considerably even before the hostilities began. Upward spikes have ranged from a 40 per cent increase in the price of eggs to a 42 per cent increase for potatoes to a 179 per cent spike in the price of tomatoes. Such inflationary figures have made almost the entire population of Gaza (1.8 million people) dependent on food aid. WFP, together with the UN Relief and Works Agency for Palestine Refugees in the Near East, has been assisting about 1.1 million people with food supplies. FAO plans to distribute fodder throughout Gaza, in collaboration with Canada, as soon as a permanent ceasefire is established.

“We have a programme that supports the resilience of agriculture-based livelihoods of Gaza fishermen, herders and farmers. We need to get this back on track as soon as hostilities cease, to promote not just the survival of Gaza’s people but their self-reliant development,” says Abdessalam Ould Ahmed, FAO regional representative for the Near East and North Africa.