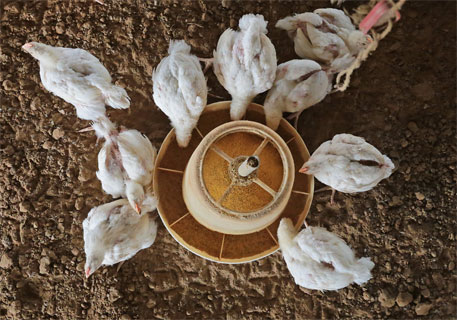 The Telangana government has started culling of chickens after the outbreak of bird flu was confirmed in Ranga Reddy district on the outskirts of Hyderabad. According to unconfirmed reports, as many as 300,000 birds have been culled so far.

The government issued a culling order on Tuesday after samples taken from Thoroor village of Hayatnagar mandal tested positive for H5N1 avian influenza virus. Samples were tested by High Security Animal Disease Laboratory (HSADL) in Bhopal and the outbreak was confirmed on April 13.

Several teams of Rapid Response Force have been pressed into culling exercise in Thoroor. The operation will continue for three to five days. All precautions, including administration of preventive medication for staff handling the birds, are being taken, says Y Thirupathaiah, additional director of animal husbandry department in Telangana.

The farm where the virus broke out had about 80,000 birds. Another 45,000 birds were there in the neighbouring farm. About 18 villages surrounding this village have poultry farms. Though only the birds in the first farm are affected, culling has been started in the neighbouring farms too as a precautionary measure. According to Vamsi Krishna Reddy, assistant veterinary surgeon of Ranga Reddy district, birds in all the farms in Thoroor village might be culled.

The Telangana government has sounded an alert in districts near Hyderabad and has also issued an advisory to the neighbouring Andhra Pradesh. Rapid response teams from neighbouring districts have been mobilised to help the officials of Ranga Reddy district. The state health department has decided to test human blood samples within 10 km radius of the infection site.