Coca-Cola plant in Tirunelveli gets go ahead for expansion 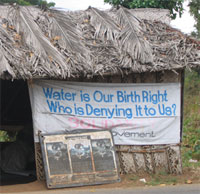 The Tamil Nadu Pollution Control Board has given the go ahead for the proposed expansion of a bottling plant owned by a Coca-Cola franchisee, in spite of protests by residents and objections raised by the state industries corporation.

The expansion would allow the bottling plant to double its intake of water for making soft drinks from the Tamiraparani river. The plant was set up in 2006 (people had protested at that time also) and presently draws about 900,000 litres a day from the river.

According to the expansion plans of South India Bottling Company (SIBC) Limited, a contract packaging company to Coca-Cola, the water requirement for the plant situated in Gangaikondan village, about 15 km from the town, will be doubled to 1.8 million litres daily. The pollution board’s approval came in spite of a Madras High Court order of August 14, asking TNPCB to address the concerns raised by residents in the petition filed by D A Prabhakar, president of Federation of Consumer Organization of Tamil Nadu (FEDCOT).

“There was an undue haste on the part of the state government environmental enforcement authorities, both at Tirunelveli and Madurai, in granting permissions to the company’s proposal to manufacture soft drinks in plastic PET bottles and increase the intake of the water from the river, which is the lifeline of Tirunelveli town and surrounding villages,” says Prabhakar, an advocate based in Tirunelveli. TNPCB officials remained tight lipped about the development.

A letter dated April 27, 2014, which is in possession of Down To Earth, shows that the State Industries Promotion Corporation of Tamil Nadu, SIPCOT, that sells the river water to the bottling plant at Rs 13.50 per 1,000 litre, rejected the expansion proposal. SIPCOT rejected the proposal asking the company to “explore the possibility of manufacturing drinks with tetra package or glass bottle instead of plastic bottles which will have an impact on pollution.” According to the proposal, an additional 50 hectares of land would be required for the new manufacturing facility. However, later, SIPCOT allowed the company to go ahead with its expansion plans.

Residents in Tirunelveli have been demanding a public hearing for the expansion of the plant, which was never organized, according to Prabhakar. Incidentally, Gangaikondan was declared as wildlife sanctuary for the spotted deer found in the region, by the Tamil Nadu government last year in October. Prabhakar says allowing the plant to expand is not only a threat to the people facing water scarcity in dry months but stands in the way of wildlife protection and conservation.