'Only nine of 74 nations where most under five deaths occur can achieve goal of 20 deaths per 1,000 live births if current trends continue'

In June 2012, at a global meeting convened by UNICEF and the governments of Ethiopia, India, and the US, a target 20 or fewer deaths (per 1,000 live births) among children under five was proposed to be achieved by all countries by 2035. International agencies accepted the targets in light of the fact that the deadline for MDGs expires in 2015.

The research paper published in the medical journal on Thursday estimates that few countries can achieve the target of reducing child deaths by 2035 even in the best case scenario where all countries match the improvements made by the best performing countries of recent years.

Lead author of the research paper, Neff Walker, who is associated with Johns Hopkins Bloomberg School of Public Health in Baltimore in the US and his colleagues analysed data from 69 low- and middle-income countries, describing the coverage of 29 key interventions like antenatal care, effort to control malaria and others, proven to reduce maternal and child mortality. Among these, 58 countries were selected from the 74 countries which together account for more than 95 per cent of all maternal and child deaths worldwide.

Using statistical models that examine trends over time, the researchers included the interventions in different countries and its impact in decreasing the mortality rate from 1990. By analysing impact of these interventions in terms of saving lives of mothers and children, the researchers estimated possible result in future with similar efforts and best practices in a few countries.

The estimates show that if current trends continue, only nine out of 74 those countries where 95 per cent of total such deaths occur, can achieve the said target. In 2010, only four countries in this group achieved the target. However, if all countries were able to increase coverage to the same level achieved by the best performing countries, the researchers estimate that 15 of the 74 countries would be able to achieve child mortality rates of less than 20 deaths per 1,000 births.

In absolute terms, the number of under-five deaths in the 74 “countdown countries” would decrease from 7.6 million in 2010 to 5.4 million in 2035 if current trends continue, and fall further to 2.3 million deaths if all countries could match the improvements in coverage of the best performing countries.

India at par with Congo, Pakistan
Levels & Trends in Child Mortality Report 2012 makes it clear that India has been one of the poor performers as far as under-five mortality rate in concerned. In 2011, 61 out of 1,000 under-five children died in India and its target under millennium development goal was to decrease the figure up to 38 by 2015. It is clear that the goal could not be achieved. The same report says that some 80 per cent of the world’s under-five deaths in 2011 occurred in only 25 countries, and about half in only five countries: India, Nigeria, Democratic Republic of the Congo, Pakistan and China. India (24 per cent) and Nigeria (11 per cent) together account for more than a third of under-five deaths worldwide, and almost 30 per cent of global neonatal deaths occurred in India, the report says.

Call to redouble efforts
Lead researcher Walker says, "While falling rates of maternal and child deaths are to be welcomed, our analysis shows that if historical trends continue, there will still be 5.4 million deaths in children under five in 2035.” He adds this number could be more than halved if all countries were able to match the performance of countries which have made the best improvements in recent years. “Governments—both of the countries most affected by maternal and child deaths, and of nations providing development assistance—must redouble their efforts to deliver known and proven interventions at high and sustained levels, and search for new interventions that will save the lives of more children," he says

Walker cites examples of malaria and HIV interventions, introduced in the late 1990s, which benefited from high financial investment and political commitment. “They are examples of what is possible, and of what needs to be done for other highly effective maternal and child health interventions," he adds. 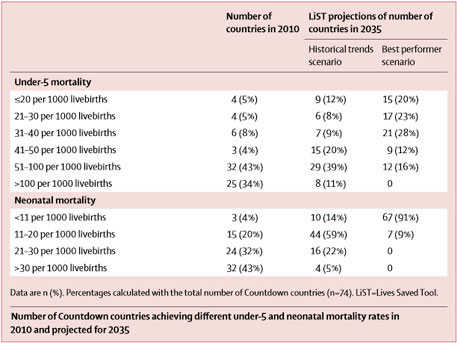 He says the challenge to the global public health community is clear. There is need to reach more women and children with the full range of effective interventions. The way forward for such interventions need to be identified. There will not be one overall formula for success, he adds.

Patterns in coverage of maternal, newborn, and child health  interventions: projections of neonatal and under-5 mortality  to 2035