India loses up to $46 billion to malnourishment 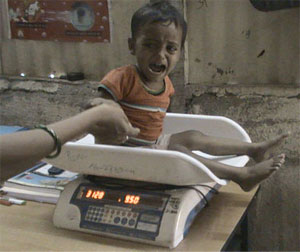 Malnutrition decrease the gross domestic product (GDP) in low- and middle-income countries, says a report by international non-profit Save the Children. Malnutrition affects educational development, physical productivity and health, and also perpetuates inequalities, such as those created by caste in India, says the report.

The report, Food for thought: Tackling child malnutrition to unlock potential to boost prosperity, is based on a study conducted in four countries—India, Vietnam, Peru and Ethiopia. It argues that investment in preventing malnutrition in women and children would be the down payment for future prosperity.

The study looks at various pathways of malnutrition, and elaborates on the cognitive and physical impacts on children, as well as additional medical costs due to ill health. These cumulative effects can reduce GDP by 2 per cent to 11 per cent.

This study is the first of its kind to link child malnutrition to educational outcomes. Children who are malnourished from an early age are severely disadvantaged in their ability to learn.

The lack of proper nutrition for pregnant women, breastfeeding mothers and young children, especially before their second birthday can impair the child’s brain development, cognitive abilities and physical development, leading to stunting or reduced growth.

The report clearly links child malnutrition to educational outcomes, and demonstrates that children who are malnourished from an early age are severely disadvantaged in their ability to learn. These children later in life go on to earn 20 per cent less that other adults who are well-nourished in their childhood.

In effect, malnourishment perpetuates the cycle of poverty, as poverty-stricken and malnourished mothers have stunted children. The report states that children born to the poorest of families in developing countries are 2.8 times more likely to be malnourished than those in the richest, and are likely to go on to earn less than their better-off and better-nourished peers.

Thus the unequal social prevalence of malnourishment acts as a barrier to inclusive growth and the reduction of inequalities.

In India, the problem of malnourishment is helping to perpetuate the caste system, says the report. It goes on to say that if nutritional inequalities were tackled in such a way that low-caste children gained the same average nutritional status as their upper caste counterpart, this would close existing caste cognitive differentials by 25 per cent.

As many as 19,000 children continue to die worldwide each day from diseases which could have been easily prevented. Malnutrition is responsible for 2.3 million children’s deaths annually, and 130 million malnourished children who managed to reach school failed to learn even basics and are left without core skills and abilities they need to make their lives more productive.

Levels and trends in child malnutrition

Web Specials United Nations … State of the WorldÃƒ… Save the Children Micronutrient … Malnutrition Gross Domestic … Food for thought: … down to earth 2012 India
SUPPORT US