Every year in March-April, Muhammad Akhtar’s daughter would arrive from Jammu and Kashmir’s Kathua district, along with her foster parents and their 200-odd goats, cows and horses, and the entire family would embark on a 500 km journey—one of the longest and arduous nomadic movements in the world—to Kargil in central Kashmir (see 'Risky route'). But not this year. On January 17, she was found raped and murdered in Rasana forest in Kathua.

Akhtar belongs to the nomadic Bakerwal community that has been rearing goats in Jammu and Kashmir for ages. In fact, the word Bakerwal translates to goat herders. A small-built, submissive man, Akhtar cannot come to terms with what has happened. When his daughter was just a few days old, Akhtar gave her to his brother who did not have children. “She was just a child. What was her fault?” he keeps asking.

The Kathua rape has enraged people across the state and the country. Community leaders have been making speeches and the counsel for Akhtar, Deepika Singh Rajawat, has filed a petition in the Supreme Court to shift the case from the High Court of Jammu and Kashmir to the Punjab and Haryana High Court, citing threat to her life. Candle marches and protests demanding justice for the child are being held across the country.

There are protests from the other side too, claiming that the accused have been wrongly implicated. During one such protest on April 12, the Jammu and Kashmir High Court Bar Association demanded withdrawal of a directive, dated February 14, by the state tribal department to stay the eviction of tribals (which include Bakerwals and Gujjars) from their forest settlements in and around Jammu. Even the chargesheet filed by the police in the High Court of Jammu and Kashmir on April 9 says that accused wanted to “dislodge the Bakarwal Community from Rasana area”. The demand to withdraw the directive was also raised by the Bharatiya Janata Party (BJP) general secretary Ram Madhav on April 16. BJP is in power in the state in coalition with the People’s Democratic Party (PDP). “The demand is unfair and shows that the settled population considers nomadic communities encroachers. The crime is a reminder of this conflict and of the continued disenfranchisement of tribal communities,” says Javed Rahi, a Jammu-based Gujjar activist. 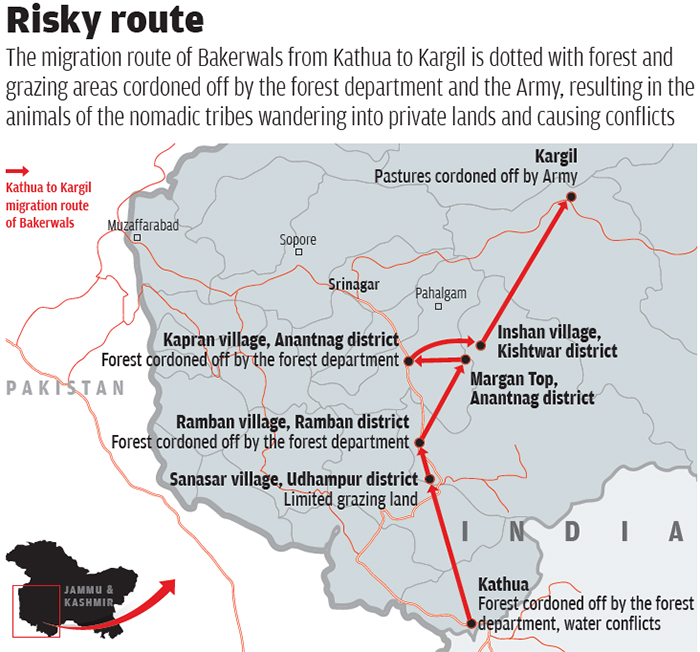 There are 12 Scheduled Tribes in Jammu and Kashmir, numbering around 1.4 million and constituting 11 per cent of the state’s population, as per Census 2011. Of these, 90 per cent are Gujjars (around 0.9 million) and Bakerwals (around 0.2 million). “Despite having sizeable numbers, the settlements of nomadic communities are under constant threat of eviction by the Jammu Development Authority (JDA) and the Jammu and Kashmir Forest Department,” says Rahi.

For instance, in 2017, settlements of 10 families were removed in Janipur region by JDA. In another case, in 2015, a boy was killed during an eviction drive in Samba district.

“These communities are suffering because the Forest Rights Act (FRA) has not been implemented in the state,” says Rahi. FRA, or the Scheduled Tribe and Other Traditional Forest Dwellers (Recognition of Forest Rights) Act, 2006, is in force across India and guarantees tribals (half the tribals of Jammu and Kashmir are nomadic) ownership of land on which they are settled, as well as access to pastures and resources.

The Forest Rights Bill was supposed to be tabled in the state Assembly in March but could not come up for discussion. “There were other Bills scheduled and therefore the Forest Rights Bill couldn’t be tabled. We hope it’ll be done in the summer session,” Qamar Hussain, a PDP legislator from Rajouri, who moved the Bill, told Down To Earth. This wasn’t the first time the Bill was not passed by the state Assembly. The Omar Abdullah-led National Conference government too did not pass it when it was in power from 2009 to 2014. For a state government that shifts its capital from Srinagar to Jammu every winter, mirroring the Bakerwal movement, denying nomads rights over forest, which are key to their livelihood, is ironic.

“The state’s 12 tribes were brought under the Scheduled Tribe category in 1991 but the government has not given them reservation. Even the prevention of atrocities Act [The Scheduled Castes and Tribes (Prevention of Atrocities) Act, 1989] has not been implemented in Jammu and Kashmir. Why?” Rahi asks.

As per Census 2011, the Bakerwals are at the lowest rung of the state’s socio-economic ladder. Mukhtar Ahmed Chaudhary, secretary of the J&K State Advisory Board for the Development of Gujjars and Bakerwals, says while 90 per cent of the Gujjar population has become sedentary—they primarily rear buffaloes which cannot undertake long journeys—the Bakerwals remain nomadic.

“Our animals die in excessive heat or cold and we need to keep moving as per the season,” says Mohammed Rafiq, a Bakerwal.  In 2014-15, the newly formed PDP-BJP government created a tribal department to give special attention to the tribal communities in the state and decided to settle them in villages.


To this end, a draft policy was formulated which got leaked to the press this February and received widespread criticism. This resulted in the tribal department issuing the February 14 directive to stay all eviction processes till the rights of tribal communities were settled under the yet-to-be-finalised policy. The move was followed by an agitation in Jammu—led by Ankur Sharma, the lawyer who is defending the accused in the Kathua rape case—seeking its revocation. 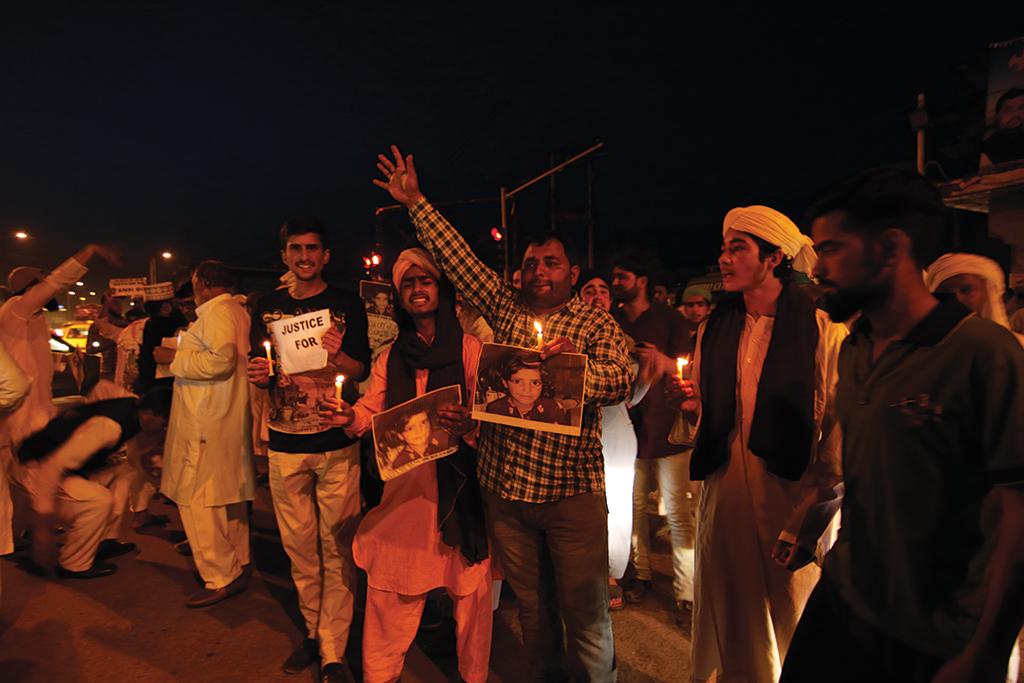 Sharma says the stay on eviction is a “move to Islamise the Hindu majority Jammu area”. For him and many others, the nomads are not a part of life in Jammu. “They think that if we get land rights, it’ll change the demographic composition of the region,” says Nazakat Khatana, a Gujjar leader from Jammu, and adds that the attacks on the tribal community have always been there, but since the new government came to power, the frequency has increased.

Sharma even says that nomadic communities cannot get land under FRA because they are nomadic and the Act does not take them into account. But this is incorrect. The Act has many provisions for nomadic communities. For instance, Section 3 (1) (d) allows “community rights of uses or entitlements such as fish and other products of water bodies, grazing (both settled or transhumant) and traditional seasonal resource access of nomadic or pastoralist communities”.

The threat to the pastoral nomads of Jammu and Kashmir is not merely political. Their means of survival have also come under threat from the demands and pressures of the sedentary population. Over the years, grazing land in Jammu and Kashmir has drastically reduced due to urbanisation. Between 2000 and 2015, pastures in the state decreased by around 11,000 ha, shows the Union agriculture ministry data. As per a 2014 Comptroller and Auditor General of India report on the implementation of the Jammu and Kashmir State Lands (Vesting of Ownership to the Occupants) Act, 2001, which gave people ownership over government land after paying a small fee, over 17,000 ha has been given to private parties since the scheme started in 2000-01. This also reduced community grazing areas.

The spaces earlier utilised by nomadic communities have also been decreasing. For instance, the land on which the Jammu All India Institute of Medical Sciences is proposed is currently a Gujjar settlement and there are around 250 families that are being forcefully evicted. Such examples abound. Rahi recounts how the 40 ha on which the Baba Ghulam Shah Badshah University in Rajouri district is set up was a pasture used by the nomads.

“The forest lands have been enclosed by the forest department and the pastures in the higher reaches of Kashmir have been cordoned off by the army. Where do the nomads go?” asks Kavita Suri, head of Jammu University’s Lifelong Learning Department, who has been researching on the nomadic communities of the state. The forest department’s disdain towards the nomadic community is also evident in their documents in which grazing is often considered a problem. To take one example, the Working Plan for Rajouri Forest Division (2014-15 to 2023-24) says, “The forest areas of this division have been facing the onslaught of grazing from permanent and migratory livestock population from time immemorial. The grazing in forest areas is unscientific, uncontrolled and un-regulated. This has adversely affected the regeneration of Chir and depletion of ground flora in other areas.”

“They say we have destroyed the forest. But how can that be? We depend on forests and we protect them. We keep the timber mafia away and our animals help improve the soil,” counters Rahi. But the fact that the number of animals owned by the nomads have increased over the years cannot be denied. While grazing helps keep forests healthy, overgrazing destroys them. As per the Integrated Sample Survey (2011-12) undertaken by the state government, livestock population of Jammu and Kashmir has increased by about 6 per cent between 2009-10 and 2011-12—from 14.5 million to 15.4 million. “Earlier I had around 50 sheep, now I have around 200 because the expenses have gone up and we need more animals to make money,” explains Mohammad Altaf, a Bakerwal.

The land pressure and the resource stress also mean a conflict with the settled population. For instance, taking the animals to a local waterbody is always a source of trouble. This becomes serious if the animals raid the farms of local communities. “I had a small settlement in Jammu’s Samba district but left because the people did not allow me to take water from the pond for my animals,” says Akhtar. 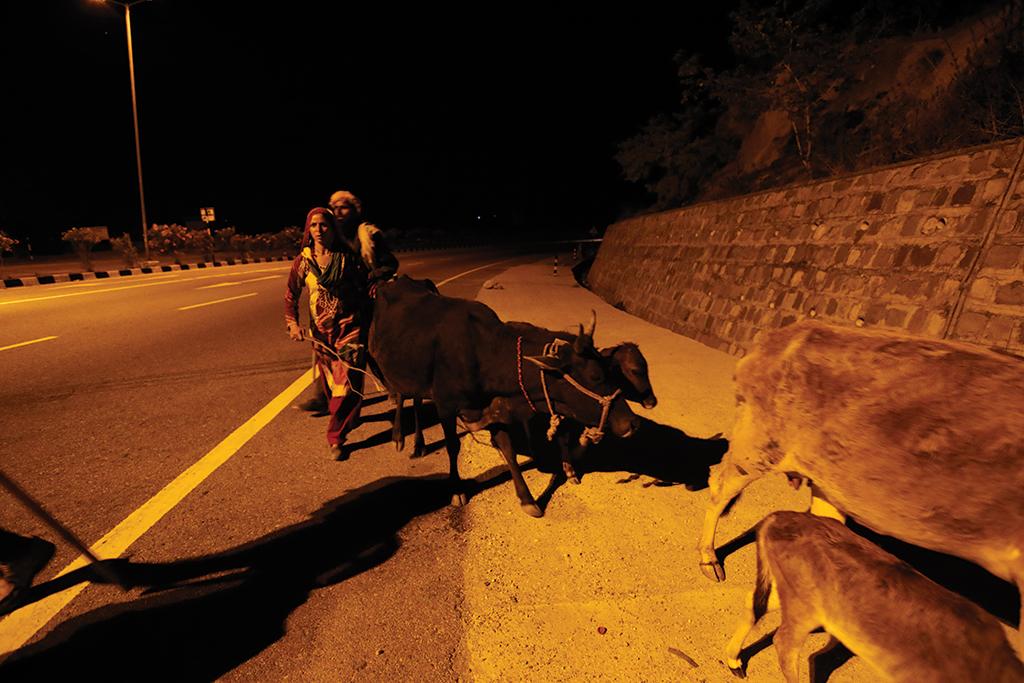 Under these circumstances it isn’t surprising that the nomads want to give up their livelihood. “I will not migrate again. I will sit and let Allah take care of me,” says Shaqina Begum, a Bakerwal. “Even if I stop rearing sheep, who will hire me? I am not educated, I don’t know anything other than my animals,” says 18-year-old Yusuf Chaudhary, standing in front of his herd of 100-odd sheep. Akhtar, however, hesitates at the idea of settling down. “All we know is how to rear animals. We do a little bit of agriculture too. But we cannot sustain our animals on a little piece of land,” he says. Suri says that the nomadic community’s plight will not improve unless it gets settled and educated. “The Gujjars have improved their lot because they have land and have received education. You’ll find many Gujjars in the administrative services of the state, but not many Bakerwals,” says Suri.

The government did start a Mobile School Programme for the nomads in the 1980s. The idea was to employ a teacher from within the community who would travel with the nomads. “But the militancy and corruption in the system killed that programme. There is a need to revive it,” Suri says. The forest department of the state also needs to formulate a better policy for nomads rather than just cordoning off forest areas and branding the community as transgressors.

“The tribals of the state have been at the forefront of India’s struggle against infiltrators from across the border but are today bearing the brunt of the saffron wave in the state,” laments Rahi. Media reports too say that Bakerwals and Gujjars were the first to inform the Army about the Kargil infiltrations.

That used to be the life of Bakerwals, one without worries. Not anymore.