Government for FDI in nuclear energy

Final decision to be taken by Cabinet soon 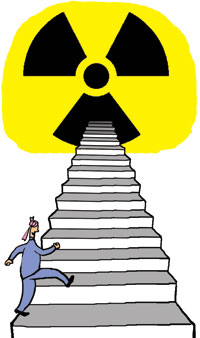 While the controversial Kundankulam nuclear power plant is likely to start functioning in a month's time, the Indian government has plans to further boost nuclear power in the country. It proposes to allow foreign direct investments (FDI) in production of the nuclear power to meet the country's growing energy needs, said Union minister of state in the prime minister's office, V Narayanaswamy, on June 13.

Earlier this year, Union commerce and industry minister, Anand Sharma while speaking at an India-France Chief Executive Forum had made similar revelations. He had said that India is expected to get foreign investment of over US $100 billion in nuclear energy in the next 20 years, of which a quarter would come from France.
When asked about the Kundankulam nuclear plant, Narayanaswamy said, “Tests with dummy fuel have been conducted 10 days back with the permission of the Atomic Energy Regulatory Board and the results were satisfactory.” He added that the plant will be operational within 20 to 30 days. The project is facing stiff opposition from the local fisherfolk community due to perceived environmental threats from the plant.

When it was pointed out that countries like Germany and Japan are abandoning nuclear power generation, Narayanswamy defended the government, saying India's energy demands are much higher than that of these countries. At the same time it is important to ensure safety of the people, he said. “If we have to achieve the target of 65,000 MW by 2032, one cannot ignore the immense potential that nuclear energy has,” the minister said.

But with just one-and-a half-years left for the general elections, introducing FDI in the nuclear power sector will be an uphill task. The UPA had faced stiff opposition from parties like theBhartiya Janata Party and CPI (M) when it mooted the idea of allowing FDI in retail. According to a Department of Atomic Energy official, amendments have to be made in the Atomic Energy Act of 1962 in order to allow FDI in the sector.

Moreover, secretary of department of atomic energy and former chairman of Atomic Energy Commission, S K Banerjee says that if nuclear energy production is set to rise, India may need to import uranium at the starting phase. “We would need fast-breeder reactors for the further enrichment of uranium as we have only about 0.7 per cent of U-235 in our reserves,” he adds.