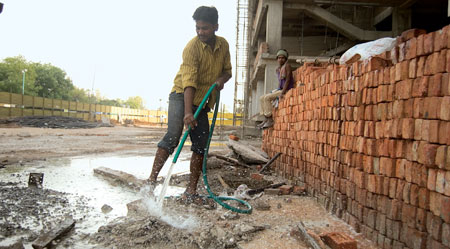 The high court of Punjab and Haryana court last week restrained the state government of Haryana from issuing occupation certificates to builders in Gurgaon’s sectors 68 to 80. Responding to a petition filed by Mukesh Sharma, a resident of Silkhora village of Gurgaon district, the court put a restriction on issuing of occupation certificates to builders till the blueprint for drinking water supply to these sectors is presented to the court.

Indira Jaising, counsel appearing for petitioner, contended during hearing that the town and country planning department had issued occupancy certificates illegally to the builders without even checking whether they have authorised water supply

The high court observed that the state government was busy generating revenue by selling colony licences to builders who are not even providing basic amenities like water to residents.
The court further directed the government to prepare a list of residents living in these sectors, with all details, the requirement of water and how it can be supplied to them.

The petitioner, Mukesh Sharma, had sought directions to take action against defaulting projects. These projects, according to the plaintiff, grossly violate the Environment Protection Act, 1986, and the Central Ground Water Authority guidelines relating to illegal extraction of groundwater for construction in the area.

Sharma had also submitted before court CD’s which show how builders are misusing ground water in the area; these were shot by him.

The Gurgaon deputy commissioner had informed the court earlier that the administration had constituted 22 teams to check illegal ground water usage and after inspections by the teams, 910 borewells had been sealed. The court gave the order in the presence of Haryana chief secretary and the chief administrator of Haryana Urban Development Authority (HUDA).

While the state authorities maintain that the efforts are being made to provide water to the residents, the court asked how long the residents will have to survive on water supplied through tankers.

The next hearing of the case is scheduled for February 10, which is also the deadline for the government to submit the blueprint for water supply.

The level of the city's groundwater had fallen below 33.24 metre last year; adjacent areas such as Sohna and Farrukhnaggar still have water at the depth of 22.79 metre and 17.69 metre respectively. Geologists say that if this depletion trend continues, then Gurgaon's groundwater level will fall below 40 metre in the next seven years, which would be dangerous. If adequate and strict action is not taken by authorities, then the groundwater reserves may fall to critical level of 50 metre by 2030.

Gurgaon’s gets piped water from the Yamuna, supplied to homes through an extensive network of pipelines owned by the Haryana Urban Development Authority (HUDA), and the public health and engineering department.

But the supply falls far short of demand. A CSE study says nearly 50 per cent is lost in transit even before it reaches Gurgaon.

A study conducted in 2013 by Gauhar Mahmood, a professor in the department of civil engineering at Jamia Millia Islamia, had stated that the total extraction of groundwater from Gurgaon was much more than the prescribed limits.