India made a strong pitch for food stockpiling for public food security at the 41st session of the Committee on World Food Security (CFS) earlier this month at the FAO headquarters in Rome.

The meeting of the intergovernmental body, attended by representatives of governments, UN food agencies, civil society and private sector, was meant to chalk out a common strategy to fight global hunger. Trade-related matters were not on the meeting agenda. Nonetheless, India used the platform to raise the issue of trade affecting food security and to tell the world how the skewed policy of the World Trade Organization (WTO) will affect the food security of India.

Two other countries, El Salavador and Jordan, also spoke in a similar vein about the unjust WTO trade agreement. India had refused to endorse the Trade Facilitation Agreement (TFA) of WTO in August this year since there had been no progress made on food-related issues. At that time India was blamed for the collapse of TFA, which is meant to “ease” worldwide customs rules. 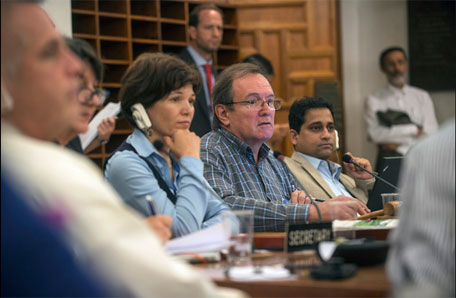 India was well prepared for the meeting. For once, the government of India roped in civil society and ensured coordination between ministries to present India’s case in the international forum.

India’s Ministry of Food and Consumer Affairs presented the highlights of the National Food Security Act and in coordination with Ministry of Commerce it showed the potential damage posed by the WTO agreement to India’s commitment to provide food security to more than 800 million of its total population.

India stated at the CFS meet that the WTO agreement must not be allowed to hamper its food security programme. "A fair amount of criticism has come from the international arena, which has challenged our public stockholding policy which is the foundation on which the Food Security Act rests. We strongly feel that trade rules must be shaped around food security policies that developing countries need, rather than policies having to tiptoe around trade rules. Developing countries such as India must have the freedom to use food reserves to feed their poor without the threat of violating any international obligation," the Indian representative said.

Dipak Kumar, joint secretary with the Union ministry of food and public distribution presented India’s case. With help of audio-visual communication, he pushed the India’s case of food security.

“We are one of three countries who were asked for presentation on status of food security. I highlighted the National Food Security Act, 2013, (NFSA’s) high points and challenges before it because of continuous WTO pursuance over India’s public stockpiling of foods,” Kumar told Down To Earth after his return from Rome.

“I also showed a three minute film on NFSA made by Directorate of Advertising and Visual Publicity. This time, the Ministry of Commerce helped in pointing out issues related to trade and how it is going to impact food security commitment of the government of India,” he added.

Another international non-profit La Via Campesina came in support of India’s stand at WTO and termed the hue and cry raised by developed countries about it as “West’s hypocrisy”.

“Civil Society endorses the stance that India has taken here today on the public stock holding issue. We, as civil society believe in the principle of coherence of human rights, which is enshrined in the UDHR. Human rights are indivisible and inter-dependent. We cannot have a right to adequate food in practice only by ensuring minimalistic entitlements and by negating the principle of policy coherence,” said Kannaiyan Subramaniam at the CFS meet. He is an activist with the South Indian Coordination Committee of Farmers Movements (SICCFM), a member group to La Via Campesina,  La Via Campesina is an international peasants’ movement started in 1993 and is headquartered in Zimbawe. It comprises about 164 local and national organisations in 73 countries from Africa, Asia, Europe and the Americas. Altogether, it represents about 200 million peasants, small and medium-size farmers, landless people, women farmers, indigenous people, migrants and agricultural workers from around the world.

“The complete hypocrisy of the developed countries, particularly the US and the EU needs to be thoroughly exposed. Whilst protecting the interests of their farmers and agri-business, they are using the blatantly unjust WTO rules to arm-twist India and other developing countries” he said.

Subramaniam said if any unjust policy violated human rights, it should be held void. “The principle of human rights should over-ride any trade negotiation or agreement that comes in the way of food security of our constituent groups,” he said.