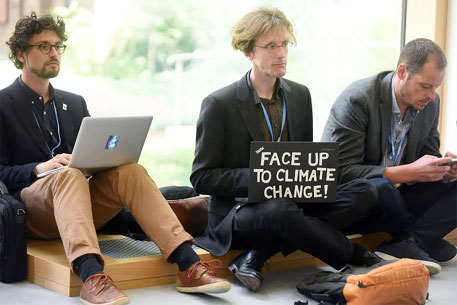 With just a day to go before the Bonn climate change conference draws to a close, India is pushing hard to redirect the focus of talks to a formal agreement for pre-2020 climate action.

Stating that high-level events on pre-2020 ambitions have become “talking shops”, India is resisting attempts by developed countries to skirt the issue and devote their energies almost entirely to post-2020 actions.

Susheel Kumar, additional secretary in India’s environment ministry and leader of the Indian delegation, told Down to Earth,“We need accelerated implementation process for (the) pre-2020 period and also for enhancing pre-2020 ambitions. How can countries accept the agreement on post-2020 actions when there is no clarity on pre-2020 action?”

While negotiations under Workstream I will lead to the new climate agreement effective from 2020, the G77+China (including India) is worried that pre-2020 emissions reduction pledges by developed countries will fall short of restricting temperature rise under 2°C.

India has asked for related working documents to be issued as soon as possible so that negotiations for the pre-2020 agreement can be started immediately during this ADP session itself.

The EU has, however, already made it clear that it is unlikely to enhance its commitment to reducing greenhouse gas emissions before 2020. The US has also ignored talks about pre-2020 and said that countries should focus on post-2020 actions instead. Before 2020, only developed countries are required to take actions to reduce emissions.

India also brought up the issue of climate finance in a discussion with Down To Earth. Kumar said, “Currently, there is no roadmap for finance. A very small amount of the fund, to the tune of approximately $10 billion is available so far. Even for that,it is not clear if it is just for one year or more. The US has committed $3 billion for 4 years, which means just $750 million per year. At this pace, how do we reach the $100-billion ambition? We cannot sit quietly for the remaining five years. It will be very unfortunate if we lose this precious time.”

There will be two more ADP sessions before COP 21 in Paris this December. Effectively, the world has 12 days (including today) between now and COP 21 to reach a new climate agreement.

The EU, in its latest submission, said it would give importance to issues of transparency, accountability, dynamism, climate-resilient sustainable development and climate finance for post-2020 actions. It does not want to enhance its pre-2020 actions on emissions reduction even though it is required by the Durban mandate. The EU has also talked about recalling the pre-2020 mandate of Durban.

India is a member of the G77+China (which has 133 countries as its members) group. In its latest submission, it has reaffirmed principles of equity and CBDR (Common But Differentiated Responsibility) and recognised that pre-2020 action is the foundation for post-2020 action.  It has also demanded an immediate and early ratification of the Kyoto Protocol amendment for its second commitment period by its parties listed in Annex B of the Protocol.