Jan Dhan Yojana: the fineprint Modi did not disclose 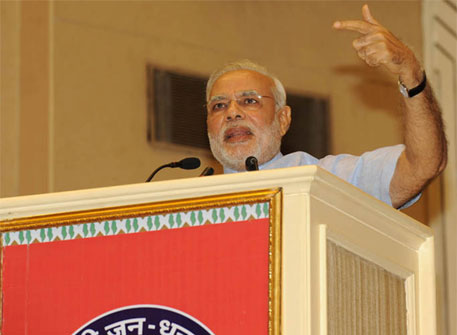 Take the case of Avinash Bharti (21), son of Komal Singh, who took cue from the prime minister’s Independence Day speech last year and opened an account in Shivaji Nagar in Dehradun district, Uttarakhand, on August 29, 2014. He met with an accident on November 1 while returning from Garhwal and died. When his father went to the bank to claim the insurance amount he was promised before opening bank account, he was turned away.

The bank officials told Singh he is not eligible to claim the insurance money, says Chandra Shekhar Gaur who has been following the case since the beginning. Gaur from Neemuch district in Madhya Pradesh, later filed an RTI to obtain details of the terms and conditions of the scheme.

The revelation was shocking. He got to know that the benefit of insurance will be available only to those who have the RuPay debit card (issued under PMJDY) and have carried out minimum one successful financial or non-financial transaction 45 days prior to premature death.

These terms and conditions were not made public when the prime minister gave his speech, but the fact is that around 80 million out of the over 100 million accounts opened under the scheme have zero balance. The RTI reply highlights that a total of 108,464,393 accounts were opened while 89,633,976 RuPay debit cards were issued. A total of 78,834,602 accounts have zero balance.

The question that arises then is why would any person who has zero balance in the account go to the bank for a transaction? At the same time, if he does not make a transaction, he will not get the promised insurance in case of a mishap. The government put in place this condition knowing fully well that the beneficiaries are from the marginalised society and are unlikely to deposit money in the bank.

For the RuPay scheme, the National Payments Corporation of India (NPCI) had entered into an arrangement with HDFC ERGO General Insurance Company (HDFC ERGO) which came into effect from April 1, 2014 and shall remain effective for a period of one year (up to March 31).

While the agreement with HDFC ERGO will end on March 31, just one-and-half months from now, the government is yet to finalise several clauses in the agreement.

Interestingly, when an applicant asks how much amount of premium the insurers have made available for accident insurance to the account holders linked with PMJDY, NPCI refused to reveal, saying it is not in public interest and its commercial interest to disclose the information.

Gaur has questioned NPCI on its refusal to disclose details. “We are entitled to know the detail of any government scheme, including investment and benefits. There is something the government is hiding,” he said. His suspicion got stronger when the Union finance ministry responded to the same question. The ministry said the premium on these insurance has not been ascertained so far. Ministry of finance gave this information on January 6, 2015 in response to Gaur’s RTI application. The reply goes on to say that the guidelines for disposal of claims under insurance are still under consideration.

Gaur points out that as per the National Crime Records Bureau (NCRB) data, about 16 people die and 58 are injured every hour in road accidents in India and 100 million people have already been brought under the umbrella of government banking scheme, by-default making them beneficiaries of the insurance scheme under the prime minister’s financial inclusion plan.

“Where are the claims of the people?” he asks. It can be safely assumed that at least several thousand claims could have been made for insurance money. But very few people have come forward to claim their insurance money. NPCI informs that a total 34 cases of claims were received by December and not a single one has been settled so far.